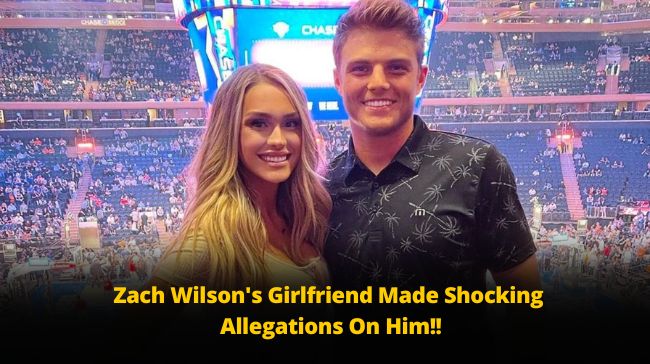 We know how much you love news, and when we bring something hot and the latest updates about the series, you guys like it? Don’t you? But this time, we bring you this crazy, unbelievable news, which Zach Wilson’s fans won’t agree with us. Pinch us, peeps, because even we can’t believe this.

After all, who is Zach Wilson?

Zachary Kapono Wilson is an American Football quarterback for the New York Jets of the National Football League.

Well, he has also played college football at BYU, where he was a two-time bowl game MVP and was selected second overall by the Jets in the 2021 NFL Draft. This 22-year-old guy had no idea his love life would raise waves on the internet—Right?

The NLF world just couldn’t resist reacting to the comments made by Zech Wilson’s ex-girlfriend!

Well, here, there: In the USA or across the globe, everyone is talking about New York Jets quarterback Zack Wilson after his not-so-loving ex-girlfriend posted a comment on social media about his love life—Isn’t it so ridiculous?

Wilson’s ex-girlfriend Abbey Gile accused him of having a relationship with his Mom’s best friend!

OMG, what is happening? This can’t be true. How can it be? But Abbey looks sure about this thing. She also accused him of being the real “Hommie Hopper”. People have also accused her of dating Wilson’s former best friend, Dax Milne!

This is just so sad: We still can’t believe it!

Milne revealed his lovey dicey relationship with his one-time oh-so-now-not best friend’s ex Abbey Gile with a lovely romantic post on Instagram, too. Looks like now, Instagram is a place where we get the hot spicy updates?

These former BFFs and the roommates Wilson and Mile also don’t follow each other on Twitter/IG!

We can’t think of in our wildest dreams this incredible football player Zach Wilson sleeping with his mother’s best friend—Oh God, but there is no proof that this news is correct! It’s said that Gile soon deleted her Instagram account, and Milne has also blocked a few of yeh comments on their romantic post!

Well, social media is such a platform where no celebrity can’t hide anything. There’s nothing private with them. Everything is public.

So, if she had been there, she would be identified. Because Zach Wilson is still quiet and hasn’t commented anything on the rumor—Looks like a smart mature football player? Or maybe just because he hasn’t done anything, that’s why he’s not getting bothered?

But will the fans and the internet leave this spicy news? Ah, naah! They can make a whole puzzle from just one piece. Then this is still a comment made by Wilson’s ex-girlfriend.

So, until it’s proved, we will still consider it as just another Zach Wilson’s love life rumor. What do you say, guys? Stay tuned, and don’t forget to follow us!

Read More – Which The Blacklist Character Are You As Per Your  Zodiac Sign?