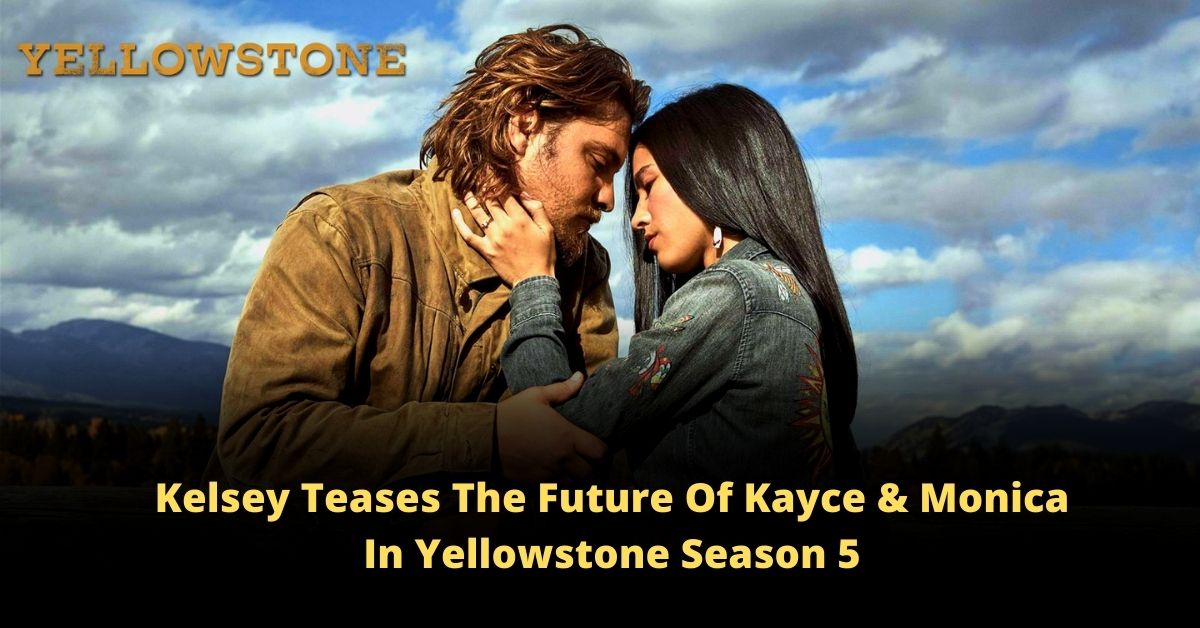 Yellowstone new season is both close and far away. While fans wait for more exciting news about new content from Paramount Network, Kelsey Asbille, who plays Monica Dutton, reveals what viewers can anticipate seeing next from her character and Monica’s husband, Kayce (Luke Grimes).

Kelsey Asbille Reveals The Future Of Kayce And Monica In Yellowstone New Season!!

Even though there are multiple stories in the Western drama that fans are excited to see unfold, many viewers were left on the edge of their seats when Kayce revealed his devastating vision with Monica. Kayce returned from his three-day purifying process looking disturbed in the Yellowstone season 4 finale. Monica said, “What did you see?” He remarked, “I saw the end of us.”

Kayce didn’t explain what he intended, but given that he and Monica have another child, it was tough for everyone to comprehend. Fans quickly assumed it meant the end of Kayce and Monica’s romance and that Avery (Tanaya Beatty) was involved.

When the former ranch worker confessed her love for him, Kayce found himself in the heart of a love triangle, as fans know.

Despite his rejection of her approaches, he had a vision of Avery. It’s unclear whether the Dutton member of the family shares this information with his wife. Still, Kelsey claims viewers won’t have to wait long and see how the pair handles the situation.

So, what can the fans expect from the Yellowstone 5? The actress told the website, “She will have a gorgeous baby bump.” “I believe that’s all I have to say.”

“I’ve begun reading the scripts.” After reading about the vision, Kelsey and Luke went to Yellowstone creator Taylor Sheridan to learn more about Yellowstone new season.

It’ll only be a matter of time before the audience is looped in. Our sources recently got hands-on some fascinating details regarding Yellowstone new season.

Meanwhile, Kelsey tossed another breadcrumb for people to chew on. Kayce appears to be rubbing shoulders with his longtime girlfriend. “Every season is unique,” she explained. “You mature and change with time, so Monica in Yellowstone new season will undoubtedly be a different Monica.”

Read More – Yellowstone Lovers We Bet You Will Go Crazy Over This Yellowstone Season 5 Update!!

Monica has witnessed what a member of this family has done to Tate. Is there a concern that history will repeat itself?

Obviously. That feeling of not being safe. Being married to a Dutton isn’t easy. Around the ranch, you’re not truly safe.

But, at the same time, I believe people must continue to live their lives, and Monica’s family has always been her most important asset. Therefore, I think her aspirations and goals take precedence over her fears.

Monica, are you still concerned about Tate?

Oh, my God, he has. She’s concerned about Tate. She put her finger down this season and said, “We have to go.” We must depart.” As a mother, I believe you never stop caring for your children, especially when they live in the Yellowstone world. Tate is getting older, and I think watching him grow into his personality in this world will be amazing.

So, are you excited for Yellowstone new season? Tell us in the comment box.