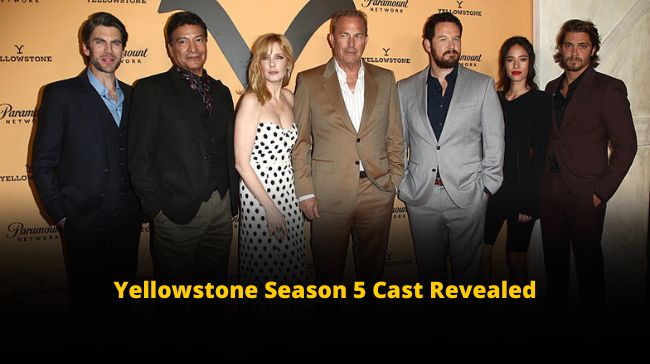 Season 5 will be an extravaganza of 14 episodes, and this is the longest season in the history of this show.

The season will be split into two parts by Paramount. From November 13 through December 25, the first seven episodes will be broadcast on consecutive Sundays.

However, we still don’t know when the second part of the season will premiere.

With two finale episodes, dividing the season allows the show to have more drama. Developers of Yellowstone will most certainly have the advantage of this division.

Yellowstone Season 5 cast: Who will return?

There were no Dutton deaths in Yellowstone Season 4. As a result, Season 5 will see the return of the entire clan, including other surprises.

To begin with the Yellowstone Season 5 cast, Kevin Costner reprises his role as John Dutton.

One significant change in Yellowstone Season 5 cast is the return of Kathryn Kelly (Emily) and Jen Landon (Teeter) on a full-time basis. They both have been promoted to series as regulars.

Finally, Piper Perabo (Summer) is back for Season 5. Furthermore, she will not be incarcerated for the entirety of her sentence.

In Season 5, is John Dutton likely to have a romantic relationship?

Yellowstone Season 5 will have some fiery romance. John Dutton and Summer Higgins are getting it on, according to an interview with Piper Perabo.

Perabo admits to be watching the Paramount series for the love storylines rather than the ranch.

We’re cranking the heat up a notch. Let’s turn up the heat for a minute because it’s been a rough couple of years.

This appears to be an improbable love story. She is a protester, and he is a rancher. However, by the end of the 4th season, they had developed mutual respect and even friendship.

She may have spent a long period in prison, but the Dutton patriarch stepped in to help her. It should be entertaining to watch this romance develop.