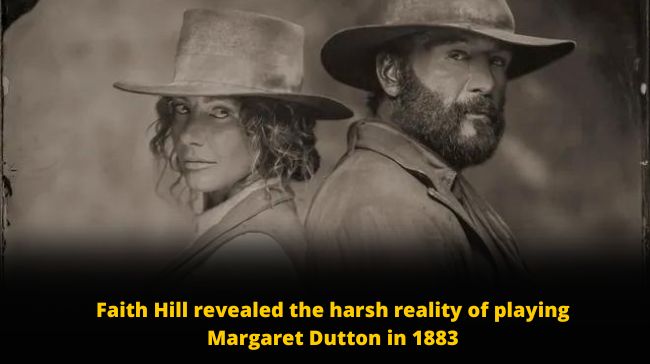 Yellowstone 1883 is one of the wildest experiences for the fans. While it offered the perfect blend of authenticity, wildness, and mind-boggling story, there is much more under the bushes. All the Yellowstone 1883 cast had to go through a lot of hardship to deliver the authenticity in the series. In a recent interview, Yellowstone Faith Hill revealed the harsh side of playing a pioneer gal with Courteney Cox. So, here is what the actress revealed!!

Within a blink 1883 has turned out to be the biggest hit coming from the bucket of the Yellowstone franchise. While the story impressed the fans, the actors captivated them. Whether it’s the central character Elsa Dutton aka Isabel May or characters like Margaret Dutton aka Yellowstone Faith Hill, everyone impressed the audience with their incredible performance. However, with several statements coming out from the 1883 cast, it seems it took a lot of effort to deliver such authenticity on-screen. Taylor Sheridan, being a perfectionist, hunted for the best from his cast and crew. He asked for a bunch of things from the cast that was hard to deliver, but these small things made 1883 more appealing to the fans.

So, in this article, we will see what the Yellowstone actress Faith Hill revealed about the hardships of playing Margaret Dutton in the show. Here is all we know.

Yellowstone Faith Hill Reveals The Hard Part Of Being A 1883 Cast Member!!

Guys, can you tell us what made 1883 a hit series? Story? Royal Cast? Well, all your guesses are wrong. Though the story and cast played a huge role in making the series a hit, it’s the director’s vision that pushed it to the heights of immense success. Taylor Sheridan is presently one of the finest creators we have in the industry.

So, his hunger for authenticity helped the cast deliver their best and weave a masterpiece like 1883. Yes, we accept that the 1883 cast had to go through a lot of hardships. Taylor Sheridan even begged the cast verite, which even includes armpit hairs.

In an interview, Yellowstone Faith Hill revealed, “Taylor actually made my husband (Tim McGraw). We were at a wedding, our nephew’s wedding, and he said, ‘Who’s gonna be the one to tell your wife that she has to stop shaving under her arms?’” “I am like what? We are at a wedding. Can’t this stop?”

Yellowstone Faith Hill suggested using pit-merkins but Taylor shot it down. Hill said, “I don’t laser, but I may now, so I never have to do that again…”

So, what are your views on the statements of Yellowstone Faith Hill? Tell us in the comment section…