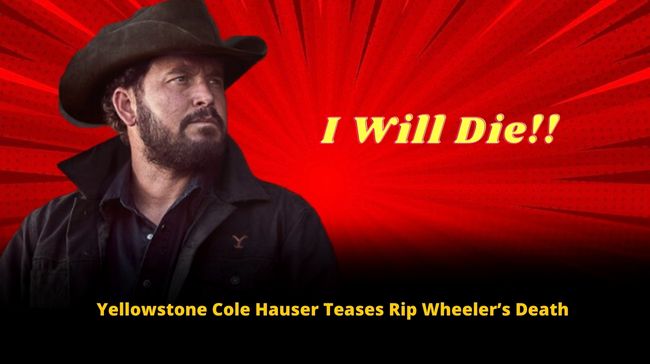 The Yellowstone Universe is going through one breaking news after another. Since its introduction back in 2018, it has claimed the position of a cult series entertaining the fans. Moreover, with the announcement of Season 5 coming out, the viewers are clamoring for updates. So, responding to the endless appeals of the fans, Yellowstone Cole Hauser offered a sneak peek of the upcoming season. Here is what he revealed…

Yellowstone Has Turned Out To Be One Of The Biggest Franchises!!

Yellowstone introduced the most dynamic atmosphere with its entry in 2018. It started as a regular TV show with a royal cast. Then, it became a fan-favorite series as the audience realized that this is not a typical Tv series. Instead, it is really bold, brutal and merciless, portraying human nature and culture. So, with the franchise getting so much love from the viewers, it’s rapidly expanding. It’s coming up with new seasons and spinoff shows to entertain the fans. Within a short time, the show has occupied a special place in the hearts of the fans. So, with the revelation of Yellowstone Season 5, Sassyshows has grabbed some crazy leaks from the show star, Yellowstone Cole Hauser.

While every actor in the show deserves a special mention for their insane performance, one name that the fans are more excited about is Yellowstone Cole Hauser. He plays the role of Rip, the only character in the show who is not a Dutton and yet manages to be one of the main protagonists.

This unique position and the fact that Rip aka Yellowstone Cole Hauser is one of the most merciless characters also makes him a fan favorite.

Rip Will Be Dead In Yellowstone Season 5!! Here’s How?

If you are a fan of Rip, we have some bad news for you.

We believe the end is near for Rip. Since Beth, his wife, compelled Jamie to kill Garrett, we expect it will ignite a battle in Yellowstone Season 5. The siblings will face a tough time. In the battle, we expect Jamie to take his revenge on Beth by turning Rip into his target. Moreover, we may see Jamie attacking Rip during his wedding ceremony and he may lose his life. Such an incident will push Beth to change the gear and walk into beast mode. She will turn into the main antagonist of the show, playing with the lives of different characters.

So, fans, what do you think about our theory about Yellowstone Cole Hauser aka Rip? Tell us in the comment box.