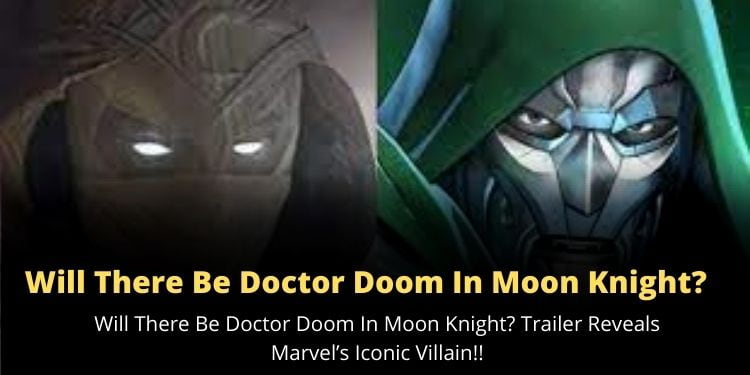 One of the hottest questions revolving around the Moon Knight trailer is will there be Doctor Doom in Moon Knight? So, here is all you need to know.

Finally, the thrilling trailer of the much-anticipated series, Moon Knight is out. However, with its official release, the Moon Knight trailer has unlocked the doors to countless mysteries, fan theories, and rumors on social media.

Fans have raised a lot of questions on social media. While the main question hitting the Marvel lovers is – Will There Be Doctor Doom In Moon Knight? Here is all you need to know.

Finally on a full moon night, during the NFL Super Wild Card Matchup, Marvel revealed the jam-packed trailer of Moon Knight featuring Oscar Issac. The trailer reveals the breathtaking story of Steven Grant who suffers from multiple identity disorder. The trailer beautifully curates the journey of Steven as he embraces his real identity, Marc Spector aka Moon Knight.

The thrilling Moon Knight trailer has marked the start of Marvel Phase 4 in a grander way. If series like Wanda Vision and Hawk-Eye are treats for the fans, Moon Knight will surely be a festival for them.

However, the trailer though is action-packed, mostly focusing on the main character, Moon Knight, there are some hidden leaks that point out something explosive coming on our way. The first question that the fans are curious to know is will there be Doctor Doom in Moon Knight?

Will There Be Doctor Doom In Moon Knight Series?

There were no past assumptions on the entry of Doctor Doom in the latest Marvel series. However, with the Moon Knight trailer’s release, everything turned over within seconds. The trailer is truly amazing. But it has some hidden reference that will surely give the Marvel fans to dance in joy.

If you pause the official trailer of Moon Knight at the 1:27 mark, you will simply be stunned. The trailer reveals a mysterious box at the back of Spector’s car. While the box is huge and mysterious, one thing you may have missed out on is the writing on it.

The words “Von D” are printed on the mysterious box. This is a clear reference to Doctor Doom Marvel aka Von Doom.

The fans who noticed this printing on the box are confused that will there be Doctor Doom in Moon Knight? Well, the chances are low as the main villain of Moon Knight will be the Vampire.

So, it may be a simple attempt by Marvel to set the stage for the debut of the Fantastic Four’s giant nemesis Doctor Doom aka Victor Von Doom in the upcoming Marvel ventures.

However, as per the comics, Moon Knight and Doctor Doom Marvel have tussled a couple of times. So, the fans were delivering theories around Victor Von Doom’s debut in Moon Knight. But Marvel is simply preparing the audience to experience a new roller coaster ride, introducing characters like Doctor Doom, Kang the Conqueror, and more.

Hope you got your answer on will there be Doctor Doom in Moon Knight. The new series will be streaming on March 30, 2022, and will be available for all Disney+ subscription holders. But we will be suggesting some free sites to watch the Moon Knight series, so make sure to stay tuned. Bookmark our page to get all updates first.

2 thoughts on “Will There Be Doctor Doom In Moon Knight? Trailer Reveals Marvel’s Iconic Villain!!”