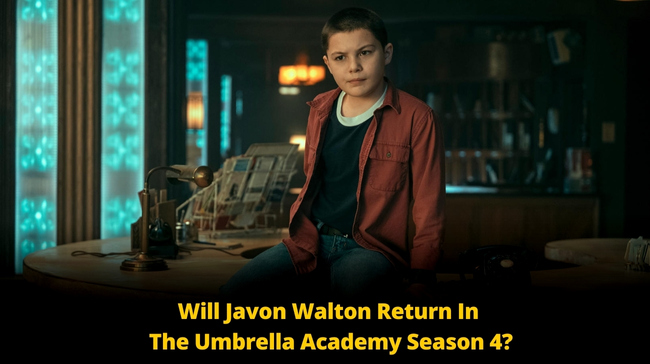 We are so happy to be back to our lovely audience again. So any guesses about what we are bringing to you today? Is it something related to the series or the movies or the celebrities? Yeah, guys, you got us right.. this time, it’s about the series again. But which one? Ah, it’s Umbrella Academy! Today, we are here to answer the question – Will Javon Walton return in the Umbrella Academy Season 4? On one day in 1989, 43 infants were inexplicably born to random, unconnected women who showed no signs of pregnancy the day before—Omg, isn’t it so strange? Imagine, seven of them are adopted by Billionaire Industrialist Sir Reginald Hargreeves, who creates the Umbrella Academy and thus prepares his children who are going to save the world ahead—guys, you must watch the previous seasons so that you can use the Umbrella Academy Season 4 Spoilers, which we are soon going to spill it off!

Did you know this Netflix hit famous series “The Umbrella Academy” is based on the Dark Horse Comic Series?

Yes, peeps, it’s based on the same name by “My Chemical Romance” frontman Gerard Way and the artist Gabriel Ba. It looks like the show has changed a lot of things from the actual Comic! Maybe it was because of financial reasons?

The weirder world, the code names, embracing diversity, cue the violins, number six is not fixed, the Vietnam collection, the commission gets an expansion, and whatnot? If you have seen the series and the Tv version of The Umbrella Academy and think it’s bizarre, the journey of the comic world is even much weirder!

Coming to Umbrella Academy Season 4, Javon Walton: The hype is being created, he’s gonna return: But, but really?

Will Javon Walton return in the Umbrella Academy Season 4? Here is all we know.

It’s shown that “Euphoria” alum Javon Walton joins ‘The Umbrella Academy’ in Season 3. Javon has played the role of Ashtray in the show, finished filming Season 2 of Euphoria in the second half of 2021, killing the Season 2 finale, and oh, how can we forget the heartbreaking bathroom scene?

WTF, will we see the Umbrella Academy Season 4 Javon Walter as Stan?

As everyone has seen at the end of Umbrella Academy Season 3, there’s a possibility of opening for Stan to have a comeback, and the same goes for Javon. After all, Stan was revealed to be the son of Lila’s friend Trudy before he was taken away by the kugelblitz in Season 3!

Javon Walton as Stan in Season 3 gave Diego a chance to explore fatherhood and come to terms with the fact of Lila’s pregnancy.

Though both are not much connected, Diego bonds with Stan, believing him to be his son. Bang on, this is how Stan could have a role in Season 4!

As per the new timeline of Season 4, Diego and Lila are shown that they might be starting a new family soon.

Boom, his connection to Stan will inspire him to look up to Stan further! What are your views of The Umbrella Academy Season 4 Javon Walter, don’t forget to comment below!

Read More – The Umbrella Academy Luther’s Romantic Life: Who Did He End Up With?