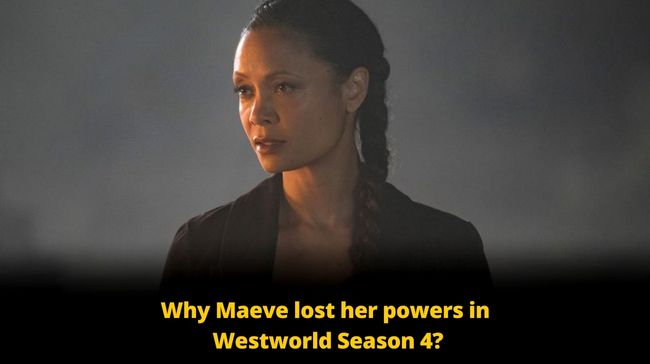 Let us get at a table today with a cup of tea to discuss the most thought-provoking question by the fans of Westworld!! Why Why Why did the powers of our favorite Westworld Maeve suddenly go away!!!

In Westworld Season 4 Episode 2, we witnessed how Maeve and her powers failed!! We all have been on a think-rally to know the reason.

Westworld Is Turning Out To Be A Treat

Westworld is a series that is set in a futuristic fantasy park. This Emmy-winning series is about an adaptation of a 1973 film with the same name and its sequel, Futureworld.

We all know that Westworld is a fictional series where a Wild-West-themed amusement park is set up, which is technologically advanced and populated by android hosts.

A place where humans indulge in their wildest fantasies with no fear of retaliation as the hosts are programmed so as not to harm the humans. But in season 3, we see an extension to it where people’s lives in the real world are controlled by Rehoboam – a powerful artificial intelligence.

As Westworld fans, we are thankful that Maeve is our friend, not a foe. Her incredible powers, which turn the hosts to bow down to her and her highly extraordinary telepathy prove how having Maeve on the human side is a blessing!

It is a shock to all the Westworld Fans when Maeve executes her “cease all motor functions” command, only to witness its failure!

After numerous failed attempts, Westworld Maeve realizes her powers are not working and puts into action the old-fashioned way to subdue Mr and Mrs Whitney, the new hosts.

Maeve observes and concludes that the reason for her failed powers was an upgrade by William. There could be no other reason why Westworld Maeve and her godlike powers could succumb in a way!!

Developing such bots that could guard themselves against the extraordinary telepathic powers of Westworld Maeve seems to be why Hale and William have come into action seven years post-Westworld 3!

We all know that the prime intention of Hale is to crush humans at the hands of the host, but Maeve, a mighty host fighting alongside humans, makes this mission a tough one! The only way to conquer this barrier was to develop Maeve-proof bots.

Though these Westworld Maeve – proof bots turned the game, for now, Maeve is up for upgrading herself to this new set of hosts.

We did see despite being Maeve-proof, the cyborg senator eventually gave in to the commands of Westworld Maeve. This was because Maeve upgraded herself in times of crisis, and thus the more she faces these new-gen hosts, the sooner she will be able to find a hack to manipulate them!

Let us wait and see how this ends!!! Follow us for more such updates.

Read More – We Bet You Missed This Detail In Westworld Season 4 Episode 1!!