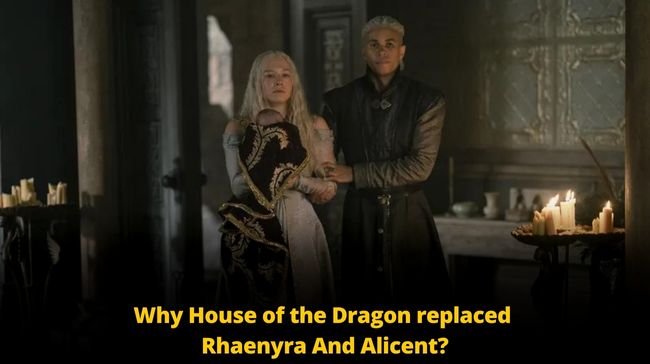 Like really? Have the new fresh faces joined the Targaryen Highertower Feud?

Hola Virtual Family, how have you been? Hope you’re doing good and having a gala time. We want to tell you guys even though we haven’t met all of you, we still feel so connected to you—so let’s get going with today’s piece of entertainment.

Today, it’s about Rhaenyra and Alicent. Do you know they are replaced in House of the Dragon? But why? Here is all we know so far.

For the ones who know nothing about House of the Dragon

House of the Dragon is an American fantasy drama television series. A prequel to Game of Thrones, it’s the second show in the franchise and is loved by many fans for obvious reasons—Are you a fan of House of Dragon?

Yes, we know you’ll be shattered listening to this, but one has to face the fact. Milly Alcock and Emily Carey have bid goodbye to the HOD family.

And who is replacing them? They’re none other than Rhaenyra and Alicent Batons to Emily D’Arcy and Olivia Cooke, respectively—are you guys excited?

The fans have always loved Molly and Emily, who were friends and then turned enemies!

These cuties have incredibly done a fantastic job and have justified their characters. The oh my god, the unique vibe was there; that’s the reason fans loved them madly!

Alicent and Rhaenyra are significant characters in the series

Imagine now there would be new faces for princess and queen roles. They’ll be playing the same roles but at different stages of life. The producer decided they didn’t want the pair to meet during production, too—isn’t that strange?

In an interview, showrunners also shared their views on the fresh faces of Rhaenyra and Alicent!

The story needed it ahead, they say. Also, this burning question of Rhaenyra and Alicent being replaced is difficult for all fans to digest. As they’re telling a story of generational war, it’s not that easy. Right from characters to their energy to their acting to justifying their roles is a big thing!

They were the only lead characters to have been recast during the big-time jump. To an extent, fans also wondered, as Cookie and D’Arcy are such great actors, why weren’t they given an opportunity for the incredible roles of Alicent and Rhaenyra? Lenor and Laena also got the same growth dose!

What do you think, fellas, would Alicent and Rhaenyra’s roles are justified?

Well, honestly, we have a very positive vibe. We feel they’ll handle it. Let’s keep the faith and see how the House Of Dragon storyline unfolds!

What do you think, guys? Would the fans love them? Stay tuned, and don’t forget to follow us; we love you so much.