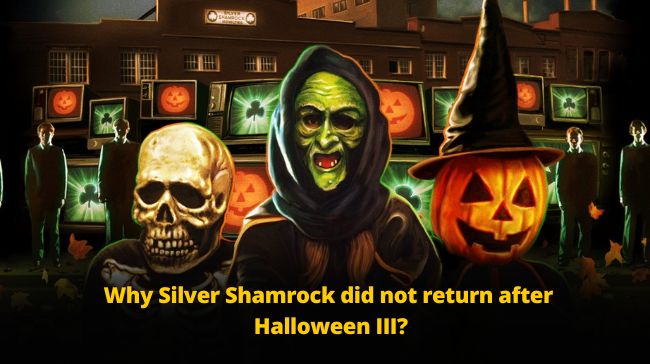 The table this time is up on discussing Halloween III – Season of the Witch and all about Silver Shamrock.

We all have Halloween Fans who relate to the Halloween franchise and the characters.

The franchise kicked off in 1978 with its first movie. The plot centered around a person with a mental health condition named Michael Myers, who was on a killing spree and murdered his babysitting teenage sister on a Halloween night when she was just six years old. He then flees to return to his hometown and starts stalking a female babysitter along with her friends.

The Halloween Franchise – Story of Sequels and Remakes

The Halloween franchise has released eleven films following its first release in 1978, with Michael Myers being the antagonist in all of the releases except for Halloween III: Season of the Witch, which has no direct connection to the other films of this series.

A remake of the 1978 release Halloween was created by Rob Zombie in 2007, followed by its sequel two years later. Then in 2018, a direct sequel to the original movie was made, which ignored all the previous sequels.

Halloween followed the sequel to this release, Kills, in 2021, and now in 2022, the final sequel Halloween Ends is scheduled for release.

The Halloween franchise has witnessed immense characters, places, and brands, including the famous Silver Shamrock, which had a pivotal role in Halloween III: Season of the Witch.

The soon-to-release Halloween Ends, the last one of the trilogy, might solve the mystery of how Michael Myer is immortal. It is quite a possibility that the immortality is by using the Silver Shamrock masks from Halloween III: Season of the Witch.

Thus the theory that the masks made by Halloween Silver Shamrock could be the reason for the immortality of Michael Myers also hints that there might be some ancient evil power connected to the mask which is taking over the body of Michael Myers to create chaos on Halloween nights.

Now, as we are witnessing that the trilogy is bringing back its legacy characters like Kyle Richards and Tomy Doyle, so it might be true that Halloween Silver Shamrock will also be given a befitting end in the last movie of the trilogy Halloween Ends, which is scheduled to release on October 14, 2022.