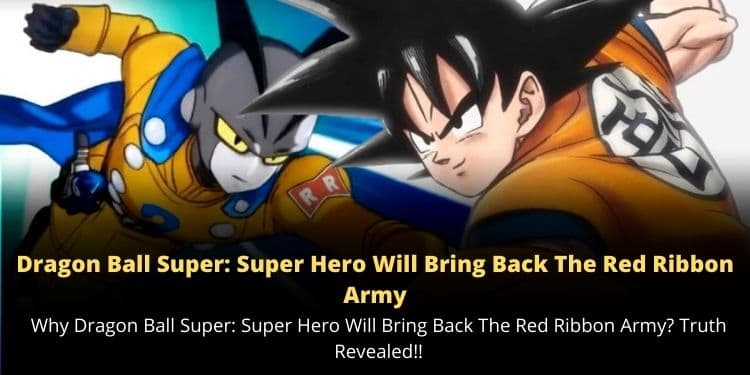 But why Dragon Ball Super Super Hero Will Bring Back The Red Ribbon Army? Here is everything you need to know.

This is thrilling not just because it is the series’s first new anime in recent times but also because it has some prominent faces in the upcoming releases. Dragon Ball Super Super Hero will bring back the Red Ribbon Army, one of the franchise’s oldest antagonists, which is the most shocking.

The Red Ribbon Army was teased in the first trailer for the new “Dragon Ball Super: Super Hero“ movie premiered earlier this year. But with the latest trailer and plot summary disclosed during Jump Festa 2022, it has become evident that a “new” Red Ribbon Army has shaped in the years since we last saw them in action.

This time, we will witness some new Androids who can provide considerable fight to Goku, Gohan, and the others in the upcoming movie. Such a teaser suggests that Red Ribbon Army is back to old antics, even if it is a new gang.

Four years later, in 2022, a new Dragon Ball Super film with an even larger “awakening” has finally arrived! The Red Ribbon Army, an evil organization that Goku previously defeated, has been replaced by a group of individuals who have built the most powerful Androids ever, namely Gamma 1 and Gamma 2.

They have not only produced the “mightiest Androids ever,” but it is also more intricate. Here we have covered every aspect you should know about this new gang and why Dragon Ball Super Super Hero will bring back the Red Ribbon Army?

What Is The Red Ribbon Army?

As part of his revenge against Goku, a survivor of the Red Ribbon Army named Doctor Gero extends the group’s history by creating a series of strong artificial humanoids called Androids.

Reviewers were mostly positive about the group. Commentators remarked that the Red Ribbon Army arc, in which the gang is depicted as Goku’s first true danger, signaled a change in the series’ tone.

Japanese animation is also a prominent example of anachronistic or politically incorrect views about real-world conventions and cliches. Individual members of the gang, like the Red Ribbon Androids, have made a lasting imprint on popular culture.

The military establishment, especially its Muscle Tower foundation, was inspired by the video game “Spartan X” (renowned as “Kung-Fu Master” outside of Japan), in which foes reproduce at a quick rate while the player moves up a tower. 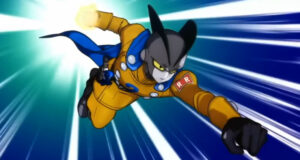 Toriyama opted to pursue his blockbuster-hit “21st World Tournament” epic with the box office hit “The Red Ribbon Army” story early in Dragon Ball’s release. This part, which originally ran from Chapters 55 to 96, had Goku fight a slew of deadly commandos over numerous episodic plots, including the “Terror of Muscle Tower” arc, which was a clever homage to Bruce Lee’s “Game of Death.”

Toriyama would incorporate aspects that would become series classics, such as the predecessors of Android 17 and 18 and Schwarzenegger homages.

The prolonged epic, which had Goku face up against the Staff Officer Black, also included the series’ first survival encounter, complete with its beam duel. Goku’s epic fight with the deadly Mercenary Tao would establish the layout for the stunning high-stakes confrontations that would help to characterize Dragon Ball for foreign viewers.

Goku went out to recover his family heirloom, the Four-Star Dragon Ball, after suffering a loss in the “World Martial Arts Tournament” at the clutches of a deceitful Master Roshi in the original Dragon Ball. This placed him in direct conflict with the Red Ribbon Army and Commander Red, who was hell-bent on obtaining all seven Dragon Balls and a desire from the Eternal Dragon Shenron.

This led to an increasing confrontation between Goku and the Red Ribbon Army’s complete force, with Goku demolishing the criminal organization one by one.

Meanwhile, Staff Officer Black, Commander Red’s right-hand man, assassinated Red when it was found that he had only planned to utilize the Dragon Balls to want to be taller, risking the lives of all his subordinates in jeopardy for his sick pride.

The Red Ribbon Army emblem was made compulsory to put on for all of these androids, from the non-canonical Android 13 to Android 20, as a continual reminder of why they were made.

Though Androids 17 and 18 revolted on Gero and killed him, the mad scientist planned his vengeance beyond the grave, using a highly sophisticated supercomputer in a secret facility to make a non-canonical comeback in Dragon Ball GT.

Although a new villain called Magenta is depicted as a pharmaceutical billionaire who covertly sponsors the resurgence of the Red Ribbon Army, none of the presumed adversaries seem to be returned from prior Dragon Ball episodes. Magenta has a striking physical similarity to Commander Red, as shown by the fact that both characters’ names are color puns.

While Magenta’s great ambitions for Super Hero are still a mystery, trailers seem to show him expanding his conspiracy to include Piccolo, Vegeta, and Majin Buu, with unclear intentions, and the resurrected Red Ribbon Army reviving its hatred for Goku and the Z Fighters. 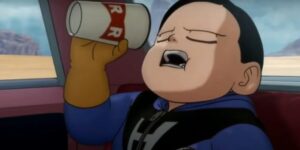 Goku had no clue that his conflicts with the Red Ribbon Army would follow him even after decades, with one of Gero’s inventions murdering him during the “Cell Games Saga.”

Meanwhile, Dragon Ball Super Super Hero will bring back The Red Ribbon Army, one of its most legendary foes to continuously threaten Goku and the Z Fighters with rising conflicts that shake their hearts.

In “Dragon Ball Super: Super Hero,” the Z Fighters will face a huge challenge as they expect to survive the ongoing conflict with the strong criminal organization and its synthetic warriors, especially now when the Red Ribbon Army seems to be backed by new members.

Why Dragon Ball Super Super Hero Will Bring Back The Red Ribbon Army?

The Red Ribbon Army may be attempting to create a popular new hero under false pretenses, and in order to do so, they will need a willing villain or two to vanquish. Perhaps the phony superhero is being dragged to the location where Gamma 1 and 2 are assaulting in the hopes of saving the day.

People would be glad for their new rescuer if the Gammas pretended to be Red Ribbon since they would be reminded of the atrocities inflicted in the past by the Army, the Cell, and Androids.

Johnny Bravo wants to reveal mugshots of Goku, Buu, and Vegeta, implying that Gamma 1 and 2 will be pursuing the Z-Warriors, though the reason for the same is still not disclosed.

And another big question is whether Goku, Vegeta, and Buu will remain silent if these villains are using the Red Ribbon Army’s name to instill terror in the populace and establish their own superhero.

According to the narrative, these new Androids seem to promote themselves as “super heroes” and proceed to fight Piccolo, Gohan, and others. It is still not clear for what particular mission the Red Ribbon Army is returning.

However, it adds to the excitement of the new film’s overarching narrative to discover exactly how courageous these new Androids are in comparison to whatever new scheme the Red Ribbon Army is hatching this time.

So, by the end of the article, we hope you know why Dragon Ball Super Super Hero will bring back the Red Ribbon Army? Do share your views in the comment section.

Bookmark our page to get more interesting articles on the upcoming Dragon Ball projects.