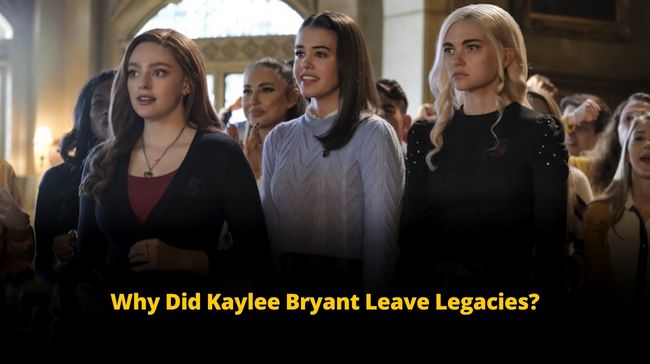 Legacies have ended with Josie’s farewell, and we are sad about it!!!

One of the most beloved and watched characters is Josie Saltzman, AKA Kaylee Bryant. She has been a part of the show since its inception in 2018.

It was on December 16, Thursday’s episode which bid farewell to Josie – “I Can’t Be The One to Stop You.” It is a fact now that she is gone, but the fans are hopeful of her return in the Legacies-Vampire Diaries-The Original Universe.

Why Did Kaylee Bryant Leave Legacies?

Kaylee’s exit was shocking… So, why did Kaylee Bryant leave Legacies? The reason behind Kaylee Bryant leaving the show is still not given, but the fans should not be that surprised as her character was already heading towards the exit.

The storyline has been hinting for a while that the character might be shooting the end days.

We already witnessed how Josie distanced herself from the Salvatore School For The Young and Gifted and enlisted at the rival organization, namely Mystic Falls High. Still, she reluctantly had to return to Salvatore School.

Kaylee Has Left But Will Return – How?

All the fans wondered why Kaylee Bryant left Legacies, but their hope that she will return seems to be working out. She played a crucial part in Legacies right from the beginning as she was the daughter of Akaric Saltzman and Caroline Forbes from The Vampire Diaries. She also had been the twin sister of Lizzie.

Because of some harrowing experiences she had in her life, she started distancing herself from the Salvatore School. She concluded that now was the time she needed to live a life of her own. Thus she bowed out of the series and took over for a new project.

Though it seems that there are no specific plans that Bryant would return as Josie, you never know, as her character is not being written off or killed… so there is always a possibility for her return.

This gives some hope to the fans as Josie is not given a permanent write-off from the series. And if Legacies could do it with Caroline,

Josie, AKA Bryant, 24-year-old, seems to pursue new opportunities on her way. We are happy for her!! We will get to see Kaylee Bryant in the upcoming thriller series The Locksmith along with Jeffrey Nording.

We are still trying to absorb the hit, and our heart still questions why did Kaylee Bryant leave Legacies, but we can see her walking on new paths of success and opportunities!! We wish her good luck!!