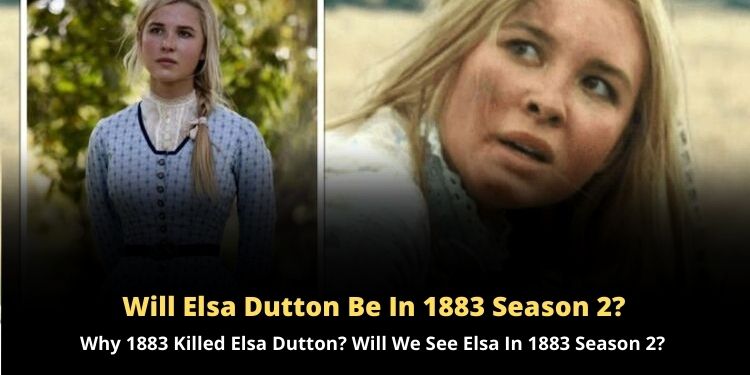 1883 season 1 dragged the audience into a journey of adventure, emotion, and jaw-dropping action. Though the series ultimately turned super entertaining for the fans, the death of its main character, Elsa Dutton brought tears to many eyes.

So, why did the show choose to eliminate such a super popular character, and are there any chances of her returning to the scene? Here is everything we know so far.

Also Read – Why Isabel May As Elsa Dutton May Leave Yellowstone 1883?

Well, breaking a million hearts 1883 season 1 has finally wrapped up, and it makes the end of an adventurous journey. Yes, the journey to the Paradise Valley has reached its climax, and it’s now time to turn the page to a new chapter.

1883 season 1’s climax has killed one of the most loved characters of the show, Elsa Dutton. We witnessed her painful death after being hit by an arrow. Though death is tragic, the show must go on and it seems Elsa’s death will help the story to branch into a new chapter.

Elsa’s fate revealed what the family has to sacrifice in order to claim the land. So, the elimination of the main protagonist of the show allows more space for the series to stress its other characters. Elsa’s death was the destiny of the series and now it can branch to a new chapter revealing how the family started a ranching empire.

Though it’s a harsh truth that physically Elsa has left the show, the fans are curious to know will Elsa be in 1883 Season 2 as the narrator? She was not only the main protagonist of the 1883 series, but she was also the narrator who won millions of hearts. So, will she continue to narrate new episodes?

Well, the answer is a bit tricky. We may find her narrating the new episodes as, during the climax of 1883 Season 1, Elsa Dutton was the one who narrated the story beyond her grave. So, she may continue to do that. Or else the show will hire a new narrator for the upcoming episodes.

So, what do you think will we get the amazing narration of Elsa in 1883 Season 2?