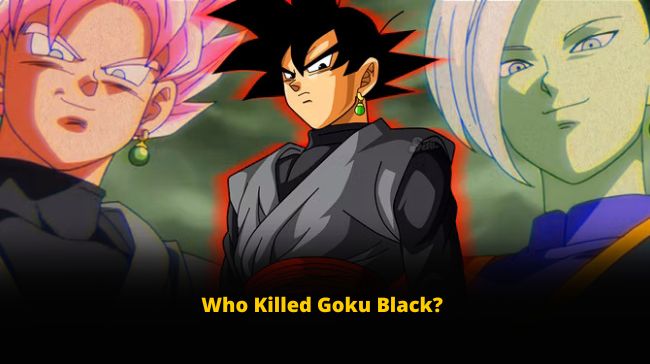 Hey, Dragon Ball fans, tell us which is the most terrifying arc you have witnessed in the show? Well, without any doubt we know, you will put the Dragon Ball Super Goku Black arc on your list.

Black Goku was one of the most deadly villains the world ever saw. While he was unsuccessful in meeting his objective and was ultimately erased from the world of Dragon Ball, Black left his footprint on the plot.

Hands down! The Goku Black arc was one of the most complicated chapters of the anime. The concept of time-traveler and multiverse left many fans stunned. Many are literally hopping around the question – Who killed Goku Black? Ya, we all know that the villain was ultimately eliminated from the scene, but who actually killed him? Here is everything we know so far.

Who Is Goku Black?

Goku Black also titled Zamasu, is a deadly alternate incarnation of Zamasu and a former Supreme Kai and Norther Kai from Universe 10. Black visited to switch bodies with Goku, the strongest Saiyan, and Shenron granted his wish. So, with Black getting hands on so much power, he went on a rampage to kill every mortal across all timelines, with Zamasu, his counterpart from the unaltered timeline. However, in the end, both Black and Zamasu were murdered. But who killed Goku Black? Is it Goku, Is It Beerus, or any other Dragon Ball Character? Here is all we know.

Well, we witnessed the rise and fall of Goku’s power levels in the Dragon Ball Super Goku Black arc. While he was one of the strongest characters yet, he failed to overpower Black. Though he managed to murder a version of the villain in an alternate dimension, when it comes to the main timeline, he failed to accomplish the mission. So, who killed Goku Black? Here is all we know.

Is Black Stronger Than Goku?

Well, yes, Goku Black was immensely powerful, and he even overpowered SSJ2 Goku in his base form. Coming with the combined powers of Kai and Goku, Black was a beast. Moreover, with his Super Saiyan Rose form, he turned out to be simply unstoppable.

While things were getting out of hand and Goku Black was slowly dominating all the fighters, Future Trunks came to the rescue. He stabbed Goku Black from the back and he transformed into Fused Zamasu. Curious then who killed Fused Zamasu? Here is all we know.

Though Fused Zamasu turned out to be insanely powerful, his new instability became his ultimate weakness. This opened the gates for Future Trunks to overpower the tyrant. Fused Zamasu fell to the blade of Future Trunks.

So, if you are here, we know you got your answer on – who killed Goku Black. Make sure to stay tuned for more interesting articles…