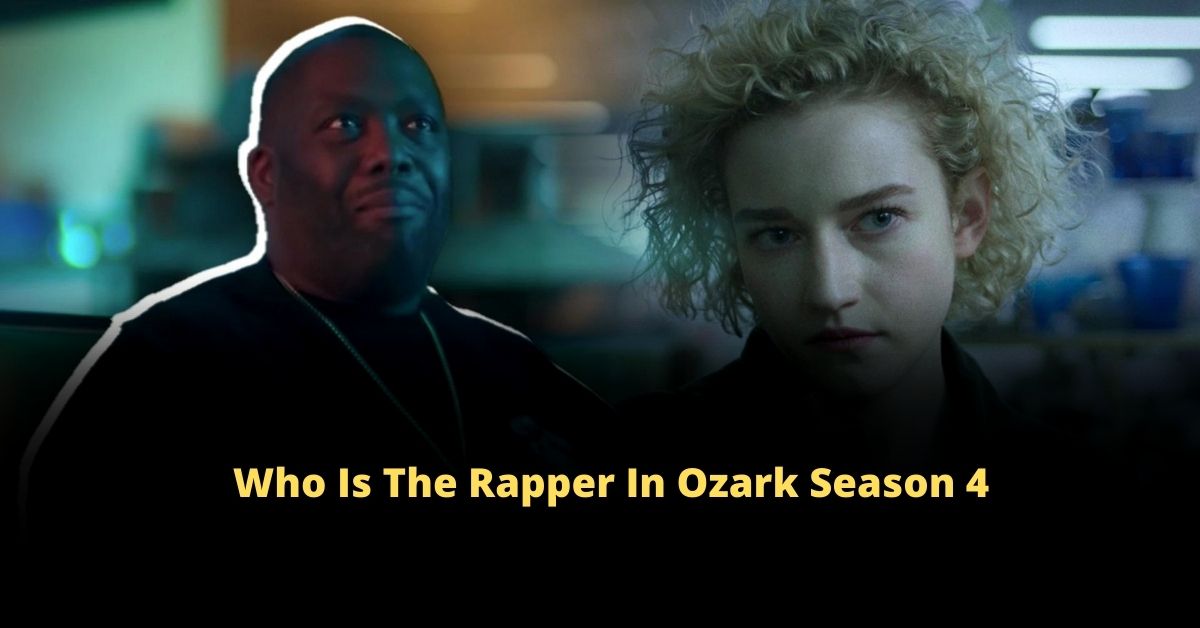 If you have watched Ozark Season 4 Part 2, one question that may be bothering you is – who is the rapper in Ozark? So, here is everything we know so far.

A real-life rapper makes a surprise appearance in Ozark season 4, episode 8, “The Cousin of Death,” which also stars Ruth. Ruth Langmore has been established as an old-school hip-hop fanatic from the first season of Ozark, a devoted, die-hard admirer of the art of ’90s boom-bap and rap.

When Ruth travels to Chicago in the first episode of Ozark season 4, part 2, which debuted on Netflix in April 2022, she encounters not just any rapper but one of her rap favorites who is the rapper in Ozark?

The rapper takes Ruth’s earbuds and listens to Nas’ “N.Y. State of Mind.” Ruth says that the music appears to both love and despise the subject of his song, and the rapper agrees. When Ruth asks whether he believes Nas would prefer not to create the record and then go through all of those events, Nas brushes the questions off before shifting the focus to the chevalier.

On April 29, the remaining seven episodes of Ozark’s final season were published. A renowned cameo appearance in one of Netflix’s Emmy-winning drama episodes startled fans. But who is the rapper in Ozark? Everything you need to know about Ozark season 4’s rapper is right here.

Who Is The Rapper In Ozark?

If you are confused about who is the rapper in Ozark? Here is your answer.

In Ozark’s final season, rapper Killer Mike makes a guest appearance. While dining in a Chicago restaurant, he runs into Julia Garner’s Ruth Langmore. Her love of rap has been evident throughout the series. She bonds with Killer Mike through Nas’ music and his allusion to growing up in Queensbridge, New York.

Who Is Killer Mike, Exactly?

Michael Santiago Render goes by the stage moniker Killer Mike. He made his solo debut on Outkast’s Stankonia album in 2000 and has since released five full-length albums. He and EI-P established the Run the Jewels duet in 2013.

Killer Mike is also a well-known activist who campaigns against socio-economic injustice, police brutality, and systematic racism. His Netflix debut is Ozark, but he previously participated in Killer Mike’s documentary series Trigger Warning, which investigates challenges in the Black community.

What Does Killer Mike Have To Do With Ozark?

Chris Mundy, who also authored the episode in which Killer Mike appeared, is a huge fan of the rapper’s work. His voice has been heard in various songs that play over the end credits of Ozark episodes, maybe most notably via a Run the Jewels song in season 3.

Why Does Killer Mike Show Up In Ozark?

Although Killer Mike’s presence in Ozark is more low-key than most other famous cameos in movies and TV shows, it is on-brand for the show, as Killer Mike’s Ozark cameo serves as a reminder to Ruth that she is in the real world.

Ruth, still grieving over Wyatt’s death, has a vision of murdering Javi. Furthermore, Killer Mike’s presence provides Ruth with someone with whom she can truly converse about rap, providing a little break from her grief over Wyatt, with whom Ruth also talked music.

Why Does “Cousin Of Death” Play Nas’ Illmatic Album?

The themes in Ozark are strikingly similar to those in Nas’ critically acclaimed 1994 album Illmatic. Ozark season 4 part 2 was released 10 days after Illmatic’s 28th anniversary. Apart from Ruth and Nas being about the same age when Illmatic was released, both Ruth and Nas grew up on the poor side of town, giving them a unique perspective on how the wealthy conduct their lives.

If you are here, we hope you got your answer on who is the rapper in Ozark? Make sure to stay tuned for more exciting articles in the future. Happy watching!!