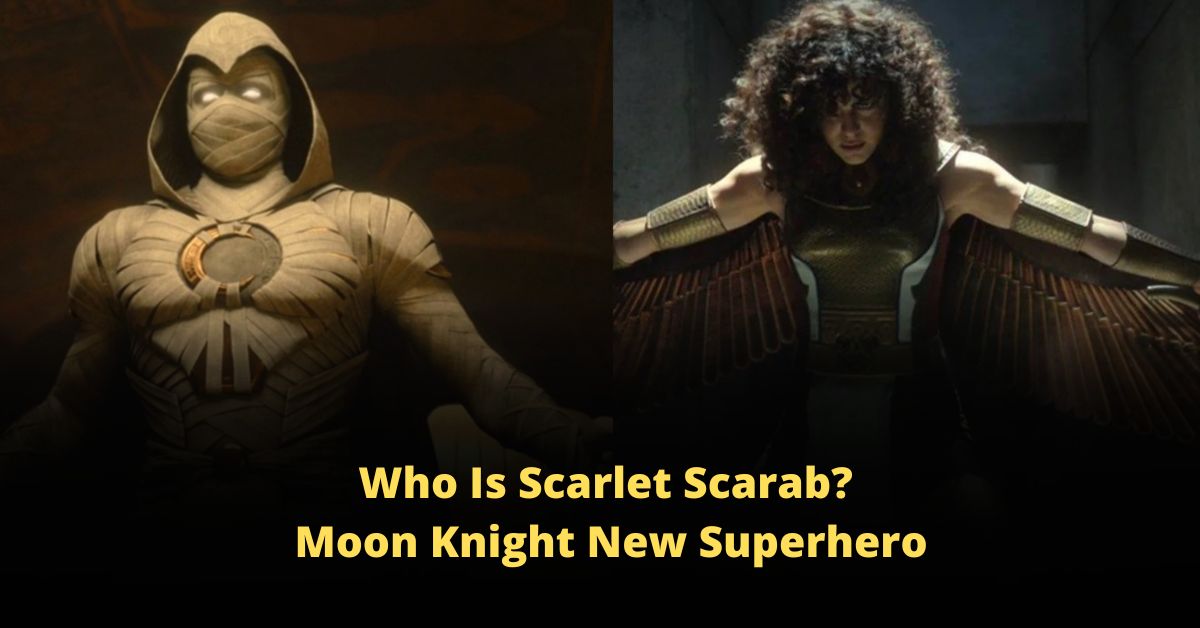 While we already know that Jake Lockley is the third persona of Marc Spector, who is Scarlet Scarab? If this question is bothering you, no more worries as Sassyshows is here with the answer.

While our favorite Moon Knight struggles against Arthur Harrow (who is the new avatar of Ammit), Layla jumps into the scene to save Marc. But wait!! Layla has some superpowers!!

Here the episodes drop the ultimate shock, Layla El-Faouly, Marc’s wife has got a superhero identity now. She is the new avatar of Taweret, the Goddess of pregnancy. While the fans were confused about her name as a superhero, Marvel has officially confirmed that Layla has taken on the mantle of the Scarlet Scarab.

But who is this Scarlet Scarab? Though Marvel has not opened up much about the character in its Disney+ series, we have a good amount of data on the Marvel comics. So, without any further ado let’s dive into the ocean of Marvel comics to know the origin of Scarlet Scarab.

How Did Layla Turn To Scarlet Scarab?

While Arthur Harrow successfully unleashed Ammit and turned out to be the Egyptian God’s avatar, Layla was the one to free Khonshu. However, with Marc dead, Khonshu offered Layla to be his avatar. But Layla clearly rejected it.

Meanwhile, Marc returned to the living world. However, after hand-to-hand combat between Khonshu and Ammit, the pyramid started falling apart. Considering the scenario, Layla had no other option than to summon Taweret and be her avatar.

Taweret accepted her request and Layla turned to her temporary avatar. This brought a change in her character, giving her new abilities. Though the fans were initially confused about the name of Layla’s new superhero form, Marvel’s official website later confirmed it to be Scarlet Scarab.

Who Is Scarlet Scarab In Marvel Comics?

Though it seems Layla is an original creation of MCU, the character is loosely inspired by a character from Marvel comics. If we hail back to the comics, Layla’s character appears to be a gender-flip of Mehemet Faoul, the second Scarlet Scarab in the Marvel comics.

However, Layla and Mehemet have a slightly different back story. While in Disney+ series, we saw how Layla became the avatar of Taweret to turn into Scarlet Scarab. However, in Marvel comics, Mehemet’s father was the first Scarlet Scarab.

He was the protector of Egypt, unlike Layla’s father who was an archaeologist. Mehemet’s father used a mystical talisman titled Ruby Scarab to change into Scarlet Scarab. However, following this death, Mehemet became the second Scarlet Scarab, inheriting the Ruby Scarab from his father.