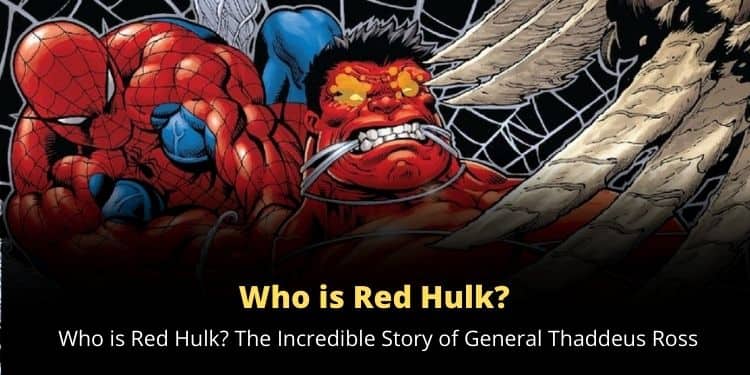 Who is Red Hulk? Where did he come from? How did he become the Red Hulk? In this article, we will explore the incredible story of General Thaddeus Ross, the man who became the Red Hulk.

Who Is Red Hulk?

Red Hulk is an enigma, a mystery wrapped in a riddle. He is one of the most powerful beings on the planet, yet his past remains largely unknown.

As a Military Man

As a young man, Thaddeus Ross enlisted within the military and received his nickname from his troops because he “struck sort of a thunderbolt” when leading them into action. Now he has become the very thing he hated most in life. He is the Red Hulk.

General Thaddeus E. Ross was born into a family with a proud tradition of military service. Both his father and his grandfather served heroically in past American wars. Thaddeus immersed himself in military history as a boy, and he learned how to fly by barnstorming at country fairs.

Ross was an Army general in charge of Banner’s research team, and he was obsessed with capturing the Hulk. Ross put Banner through a series of brutal tests, hoping to duplicate the Hulk’s strength for military purposes. When Banner finally transformed into the Hulk, Ross had him captured and imprisoned.

Is Red Hulk a villain?

Red Hulk is not a villain, per se. Instead, he is a product of his obsessions and fears. General Ross became the Red Hulk because he was obsessed with Banner’s transformation into the Hulk.

He wanted to duplicate that strength for military purposes, and he ultimately succeeded in doing so. However, the process also turned him into a giant red beast.

Is the Red Hulk stronger than Hulk?

There is no definitive answer to this question. The Red Hulk is just as strong as the Hulk and sometimes even stronger. However, it should be noted that Banner’s Hulk persona is usually stronger than Ross’ Red Hulk persona. This is because Banner has had more time to train and develop his Hulk powers.

1 thought on “Who is Red Hulk? The Incredible Story of General Thaddeus Ross”