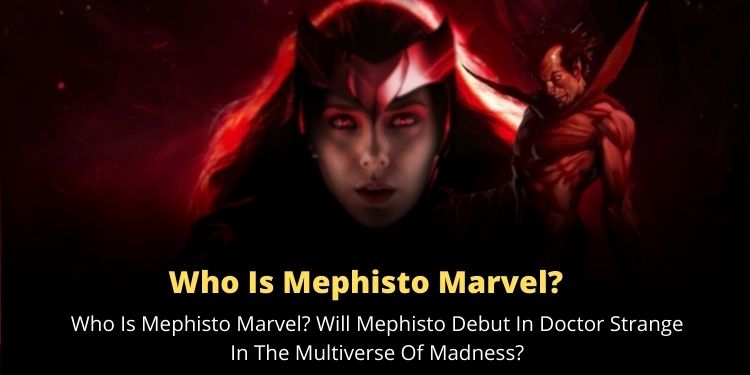 If you turn the pages of the Marvel comics, one name that may repeatedly hit you will be Lord Mephisto. Moreover, with tons of references to Mephisto floating around in the MCU movie – Spiderman: No Way Home and series – Wanda Vision, the fans are curious to know – Who is Mephisto marvel?

So, navigating through the Marvel comic and other sources, Sassyshow has prepared a detailed article on Mephisto marvel. You can read the complete article below to know everything about Lord Mephisto.

If you have been into the talks about Wanda Vision, one name you have surely heard off will be Mephisto. The series has constantly highlighted the character and has quoted him as a secret villain of Wanda Vision.

So, it seems MCU is gearing up to drive in the most iconic evil character from the comics. Therefore, if you are an MCU fan, you must be curious to know more about who is Mephisto Marvel and how he will join MCU phase 4.

Here is everything you need to know about Mephisto marvel, his origin, powers, relationships, and future in MCU.

If you are wondering who is Mephisto marvel, here is your answer. In simple words, Mephisto is one of the most iconic villains hailing from the Marvel comics. While he is quoted as one of the most deadly villains in Marvel history, his ruthlessness is above imagination.

In the comics, Mephisto marvel is a character who is defined as an omniscient infernal manipulator who grabbed the throne of power and rule the world through his own eternal punishment that leads to torture and treachery. Whereas, his dark practices have a mind-boggling effect on the Marvel Universe.

In other words, Mephisto can be defined as one of the most deadly threats to the Avengers, who is a version of the Devil. He is the Hell Lord who carves for the souls of mortals on the Earth. Over the years, showcasing his stone-heart and evil intentions, Mephisto has turned out to be one of the most iconic villains in Marvel Comic Universe. So, now it’s his turn to enter the MCU.

Mephisto is a character wrapped in the color red that symbolizes blood. His skin is red and he also loves to wear red-colored clothes. With this, the creators portray his similarities to the Christain Devil, who desires for the souls of the humans on the Earth.

If we go with the Marvel comic books, Mephisto has a relationship of hatred with many of the Marvel characters such as Spider-Man, Doctor Strange, Scarlet Witch, Doctor Doom, Ghost Rider, and Silver Surfer.

Now that you know who is Mephisto marvel, let’s talk about the comic book origin of the character.

The character of Mephisto was added to the Marvel comics by John Buscema and Stan Lee as they were greatly inspired by the deadly demon Mephistopheles of Faustian legend and German folklore.

Though Mephisto was initially created with a short-term view, as the creators thought to introduce him as evil against Silver Surfer. However, with the readers showering their attention on the character, Mephisto’s role in Marvel comics started extending and ultimately he made his debut as an antagonist against many of the Marvel heroes.

Moreover, Mephisto is the one responsible for multiple events that incredibly impacted the Marvel Cinematic Universe. Some of the terrible events piloted by Mephisto in MCU are – driving Wanda crazy after she absorbed the fragments of the soul that Wanda Maximoff utilized to create her twin, wiping off the marital life of Spiderman in exchange for his Aunty May’s life, and also captivating Doctor Doom’s mother’s soul in the hell.

So, with Mephisto’s multiple references in Wanda Vision, it may be possible that Marvel is setting up the stage for his entry to MCU.

Mephisto’s Powers – How Powerful Is The Demon?

Mephisto is one of the most iconic villains in the Marvel comics who holds insane abilities and rules his own hell. He has access to the world of darkness and he drives in energy and magic from there, which helps him to fulfill desires.

Mephisto possesses the ability to shape-shift which allows them to hide in the shadows of anything and everything he desires. His deadliness does not end here as he possesses the powers to alter time and reality. He can also play with the memories of the mortals. Moreover, Mephisto is more powerful in his own realm, than he is in other Marvel universes.

Is Mephisto In Wanda Vision Series?

As of now, it’s not possible to predict whether Mephisto is in Wanda Vision or not as the creators have not given any straight indications. Moreover, the plot of Wanda Vision only revolves around the life of Wanda, while she uses fragments of Mephisto’s own soul to create her twin babies, Tommy and Billy.

However, nothing can escape the eyes of true Marvel fans as though the creators have not clearly mentioned Mephisto’s entry in MCU, the character has been teased throughout the series.

The first reference we got about Mephisto was when Evan Peters Pietro mentioned the words “Hell” and “Devil”. Here he may have referred to “Mephisto” as the devil and his hell.

Though the character of Mephisto has not been featured to its fullest in Wanda Vision, it may be possible that Marvel is just setting up the stage for his booming entry and he will be involved in the upcoming Marvel ventures.

Will Mephisto Appear In Doctor Strange In The Multiverse Of Madness?

With the gates to the multiverse wide open, it’s pretty obvious that some uninvited guests will enter the MCU world. Moreover, with the director being Sam Raimi, the man behind masterpieces like Spiderman and The Evil Dead, we can expect some bombs dropping in the new Doctor Strange movie.

However, as per the leaks, this time it’s not Mephisto who will play the role of the antagonist. It will be Shuma-Gorath who will take up the crown of the villain in Doctor Strange 2. Shuma-Gorath has also confirmed his appearance in the movie. So, all Marvel fans, you will have to wait for some time before diving into the Hell of Mephisto.

So, now we believe you know who is Mephisto Marvel. Tell us when according to you the Marvel creators will use this character in the MCU. Make sure to leave your valuable comments below.

Also, bookmark our page as we keep on adding articles that are truly a gift to all Marvel fans.