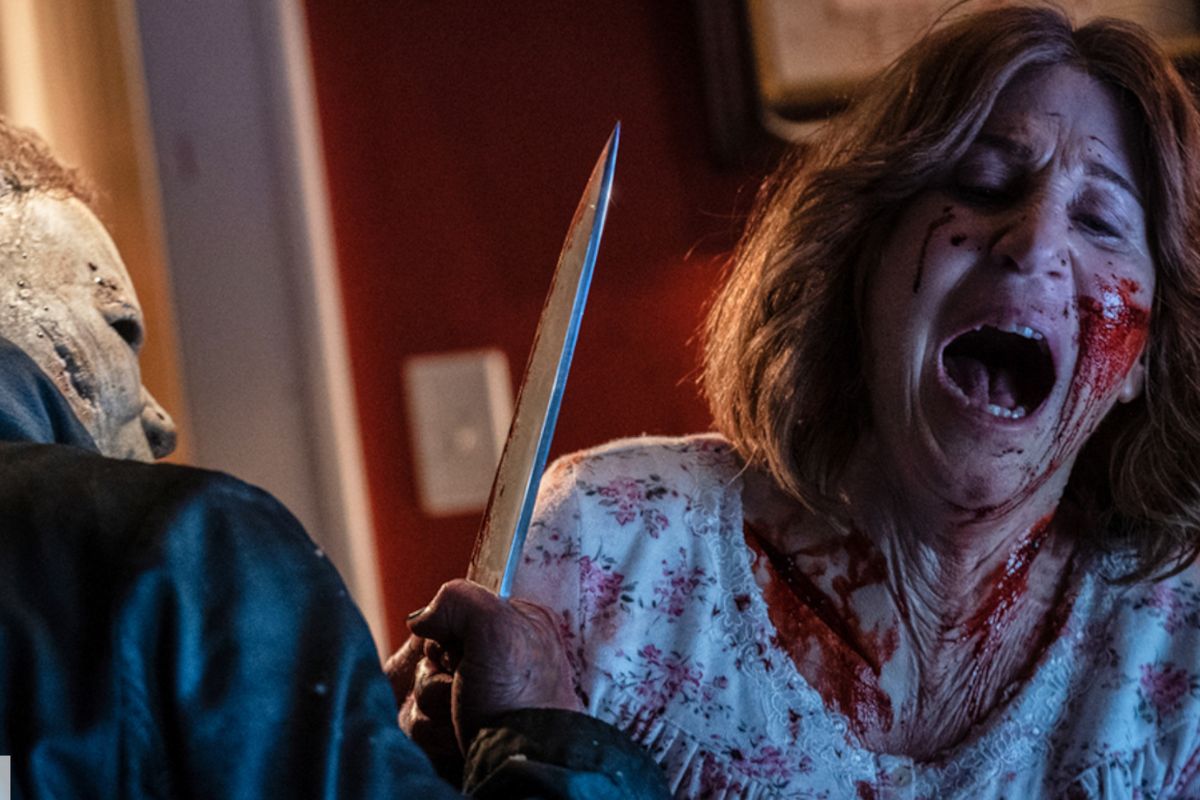 When it comes to never expected twists, Halloween Ends will always be a masterpiece. Who the fans believed to be the masked killer was not really the main antagonist. This Halloween chapter is loaded with terror and kills.

With the main antagonist picking up Michael’s butcher knife and slaughtering the Haddonfield resident, the audience witnesses a bunch of deadly scenes. But who dies in Halloween Ends? Or how many die? Is Michael Myers really dead? Does Corey die in Halloween Ends? Read on to know more…

Who Dies In Halloween Ends?

The rampage of deaths on Halloween Ends starts with a young boy named Jeremy. Back in 2019, while babysitting the rascal on Halloween night, Corey forces open a locked door and accidentally pushes Jeremy over a banister.

Though this was not a pre-planned murder like most people who dies in Halloween Ends, Jeremy was the first one who lost his life.

While situations went out of Corey’s hands, he tried to escape and in doing so he stabbed a homeless man in self-defense. Again, it was not intentional. However, things were going south and all the events were pulling down Corey into the world of darkness.

Corey’s next target was Dr. Mathis and Nurse Deb, at the medical facility. By this time, Corey has turned out to be a full-fledged murderer. He pulled the doctor, wrapped his face in plastic, and stabbed him a thousand times, till he took his last breath.

In the meantime, Michael also tried his hands on the nurse and stabbed her in the chest.

Corey then screws Michael to grab his mask and move toward his main target – the marching band bullies on Halloween night. He kills four of them in the most deadly way he could. However, in the crossfire, Corey’s father turned out to be an unexpected victim.

Did you expect an emotional breakdown of Corey after his father’s death? Well, it was definitely not the case. It turned Corey into a complete monster and he straight away went to his house to kill his mother.

Is the death rally finished? It’s a big no. Corey then moves to the radio station and encounters a simple receptionist. Next Corey kills Willy the Kid and cuts off DJ’s tongue with a scissor.

So, in case you were wondering who dies in Halloween Ends? There were many, but these were the people Corey murdered, either intentionally or unintentionally.

Does Corey Die In Halloween Ends?

After this deadly rampage, Corey rushes to Laurie’s house. Though the fans were eventually hoping for the murderer’s domination things appear different. Laurie shoots Corey and knocks him down on the ground. So, is this the end of Corey? Does Corey die in Halloween Ends? Well, definitely not.

Michael steps into the scene and grabs Corey’s knife. Corey then woke up and things got heated up. The pair fought until Michael snapped the neck of the copycat with his knife.

Does Laurie Die In Halloween Ends?

Though the show reveals that the only way to pull Michael off the scene is to eliminate Laurie, she remains to see another day.