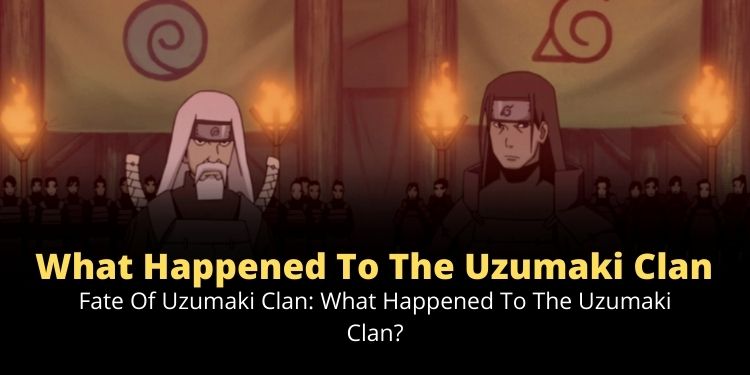 The presence of several clans, each with their own distinct cultures, histories, and customs, is one of the most intriguing features of the Naruto series. Boruto, the Naruto sequel series, focuses on the youngest generation of these diverse tribes’ members.
The Uzumaki clan, home of the franchise’s protagonist (Naruto Uzumaki), is the most intriguing of these tribes. Unfortunately, their Clan is also one of the unluckiest in the Naruto universe. Let us look at the Uzumaki clan’s unique abilities, as well as what makes its background so tragic.

Asura tsutsuki’s offspring, the Uzumaki, had a distant blood relationship with the Senju clan. The Uzumaki and Senju clans remained close over the years, with members of both clans marrying at times, such as Hashirama Senju and Mito Uzumaki.
Following the formation of Konohagakure at the conclusion of the Warring States Period, the Senju decided to put the Uzumaki’s logo to Konoha’s flak jackets as a mark of their clans’ solidarity.
Over the next few decades, Konoha and the Uzumaki’s own Uzushiogakure stayed close friends, with the Uzumaki delivering fuinjutsu to Konoha whenever they needed it.  The Uzumaki Clan’s Mask Storage Temple was eventually built on the outskirts of Konoha.

The Uzumaki’s fuinjutsu skills won them both admiration and dread in the ninja world. Some of the world’s clans gathered together to demolish Uzushiogakure when Kushina Uzumaki emigrated to Konoha, considering the village was too strong to survive.
The survivors of Uzushio’s annihilation fled into hiding and dispersed around the globe. Nagato was reared on the fringes of Amegakure, Karin temporarily resided in Kusagakure, and Kushina lived in Konoha and had a son named Naruto.
With its last known representative Naruto marrying a Hyga clansman and having two offspring, the Clan was recognized as being part of Konoha at some time, leading in the Byakugan being infused into the Clan’s DNA.

The Powers of the Uzumaki Clan

The Uzumaki clan was renowned for their longevity, which explains why its members had a much stronger life force and lived far longer than the typical shinobi. Mito Uzumaki, for example, survived the reigns of Hashirama and Tobirama as former Hokages till the tenure of the Third Hokage, when Kushina was to become the next Jinchuriki.
Mito survived for a long time after the tailed beast was pulled from her, albeit she was debilitated. Kushina, on the other hand, was still able to use her talents to combat and subdue the Nine-Tails. They would die instantaneously if the tailed beast was pulled from an ordinary shinobi.
Due to a strong lineage and large chakra reserves, all of the Uzumaki portrayed in Naruto and Boruto is very strong. Mito and Kushina Uzumaki were known to have massive chakras capable of repressing a tailed beast, which is why they had become the Nine-Tails jinchuriki in the first place.
Naruto Uzumaki acquired its tremendous chakra and extraordinarily fast healing capability despite not being a redhead. According to the Boruto manga, his current massive chakra reserve level is not disclosed. Some clan members have the ability to materialize Adamantine Chains from their bodies, which are capable of silencing anything, no matter how large.

The Uzumaki Clan was an Uzushiogakure-based clan having links to the Senju Clan. They were masters in the art of Fuinjutsu. Uzushiogakure was demolished because neighboring villages dreaded them, believing that they would utilize the skill of sealing to subjugate everyone.
As a result, the Clan dissolved and dispersed. Karin’s mother, Nagato’s parents, and Kushina were among those who were spread out. Karin, who was easily identified as an Uzumaki due to her red hair, was the one who received the Chakra Chains via her ancestry.
In addition, descendants of Uzumaki, including Mito Uzumaki, Kushina Uzumaki, and Naruto Uzumaki, turned into Kyuubi Jinchuuriki. Kushina Uzumaki and Minato Namikaze have a son named Naruto Uzumaki.
Kyuubi invaded the Clan on the day of his birth, killing Kushina and Minato and turning Naruto into a Jinchuuriki. Naruto wedded Hinata Hyuga and had kids many years later as The Hero of the Shinobi World, resurrecting the Uzumaki Clan.

Why Was The Uzumaki Clan Exterminated?

Let us look at a few of the causes Zetsu manipulated clans to exterminate a group of fewer than 200 people. Each of them had the ability to call a deity with the same level of power as the Shinigami. There are two frightening facts.

The other clans were frightened of these traits and exterminated The Uzumaki Clan together.

Destiny of The Uzumaki Clan After the Third Ninja War?

The Uzumaki Clan was assumed to have been annihilated long before Naruto was ever considered. The Clan’s strong sealing jutsus and their huge force of life made the people surrounding them fearful during the third great ninja war. The only exception was Konoha, who was a strong association of the Uzumaki Clan.
The Villages banded together and attacked The Uzumaki’s Village, almost killing everyone. However, there are a few survivors, including Karin’s and Nagato’s parents and Kushina.
Except for Konoha, other villages were scared of the Clan’s sealing Jutsus in the third ninja fight (with only a few hand gestures, they can seal off a monster). They then stormed Konoha and slaughtered everyone.
Consider the rest of the group: we have seen every Uzumaki shinobi in the series. Boruto has had exceptional talents from the beginning. Karin was believed to have a powerful sensor and to have extremely diluted Uzumaki blood. She also has extraordinary healing abilities. Despite her reputation as a non-fighter, she has the capacity to fight.
Kushina Uzumaki faced the frightening Kyubi ripped from the seconds after she was born, and she was dying at the time. Despite this, she managed to keep an entire kyubi until she died.
She taught Minato the Clan’s seals after he had excelled Jiraiya as a master of fuinjutsu to demonstrate her Clan’s fuinjutsu talents. She was ten years old when she went to Konoha and learned this information.
Mito gave her daughter Tsunade the seal of a thousand powers. The latter imbued her with complete Kyubi and survived for nearly six decades thereafter.
The seal defeated Kaguya twice. Biju uses Seals to defend itself. A kekkei genkai was similar to fuinjutsu. Their chakras have sealing abilities as well. As we were informed, the Clan is OP, and they were sheltering to avoid being chased by their assailants. Kushina was in Konoha, Orochi hired Karin, and Obito hired Nagato.
Furthermore, no one knew the Clan was still alive. We do not know with certainty, but the Clan might still be alive and well but hidden. This Clan is the most formidable in the sense that we have yet to meet their prodigies, and they’re all very strong.

Here are the 10 known characters from the Uzumaki Clan –

Frequently Asked Questions ( FAQs)
Q1) Who Killed the Uzumaki Clan?
Ans – Itachi is regarded as the one who murdered most of the members of the Uzumaki clan.
Q2) What Clan Is Jiraiya From?
Ans – Jiraiya is from the Ogata Clan.
Q3) What Clan Is Sakura?
Ans – Sakura is from Uchiha Clan.
Q4) Is the Uzumaki Clan The Strongest?
Ans – The Uzumaki was regarded as one of the strongest clans in Naruto anime. It consisted of the strongest members.
Q5) Who Is The Weakest In Uzumaki Clan?
Ans – Karin is often titled the weakest member of the Uzumaki Clan.
Conclusion
If you are a true Naruto fan, we know you loved the article. Follow us to know more interesting facts on Uzumaki Clan. Make sure to share this article with all Naruto lovers.