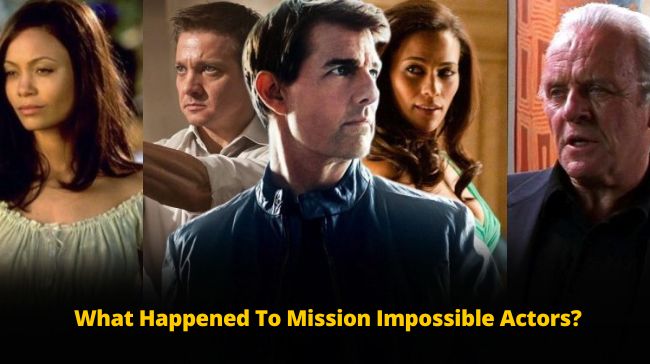 Guys, did you know?

The original “Mission Impossible” was a TV series that aired in the mid-1960s: when Tom Cruise was just a little kid?

Ah, we didn’t know it. But it looks like now everyone knows it. Of course, when they think of ‘Mission Impossible,’ many people think it’s Tom Cruise’s franchise, which has cast many famous names over the years.

The original Mission Impossible series was aired in 1966 and lasted until the beginning of the 70s. The show had a group of agents that belonged to the IMF that operated secretly to fight evil organizations and dictators.

Also, as everyone knows, though several members of Hunt’s team have become a repeating presence in the movies, many of Tom Cruise’s co-stars are restricted and limited to hardly one or two appearances across the series.

What actually happened to the Mission Impossible actors?

To play the villainous Ambrose, he gave the role of Wolverine in X-Men. After MI, he appeared in a variety of television and film shows.

Also, he was seen as the primary antagonist in “Taken 3”. Everyone loved him in Desperate Housewives, Batwoman, and the series Irvine Welsh’s Crime, too. He lives in London with his wife Claire Forlani, and yes, they have a child, too.

Who knew his role in MI would lead him to Luhrman’s 2022 film ‘Elvis.’ Mostly seen on Australian television and cinema, he has also won the Australian Academy of Cinema and Television Arts Awards.

He has three children living in Sydney, becoming a successful television cooking personality and author.

With MI roles, she has a career in films and shows with multiple high-profile roles like Source Code, Pixels, Patriot’s day, The Path, Messiah, etc. She lives in New York with her husband, Peter White, and two children. Following his MI role, he played English Monarch Henry Vlll in the series The Tudors earning an Emmy Award Nomination for his spectacular performance.

Apart from that, he was also seen in August Rush, Vikings. He married actor Mara Lane, and they have a child. It’s also said, Meyers has done a few modeling endorsements, too!

One of Hunt’s earliest opponents in the franchise. Following his MI appearance, he has continued to have a remarkable acting career in film, television, and stage.

With his notable roles of Kittridge, there are ‘Revenge’ and ‘Quantico’ acting as government bureaucrats. Also, he lives with his wife Claudine Cassidy in LA.

Stay tuned for spicy updates because we love bringing the latest updates to our lovely audience!