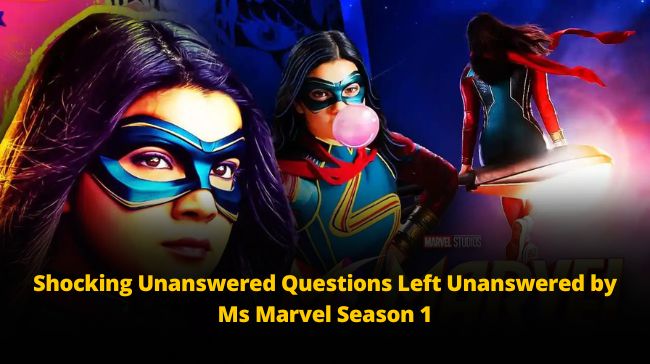 MCU has always kept its fans on the toes with its flick and series released back and forth.

With the introduction of Ms Marvel Season 1, via series at Disney+ Hotstar, the fans have been glued to one more superhero in the list of the MCU clan.

The series revolves around the character of Kamala Khan, a Pakistani- American teenager, and her journey as a budding superhero. Her family during the partition era, her great grandmother AKA Aisha’s connection to the Noor Dimension, and how she finds superpowers through a family artefact.

The characters around her, too, have a say in the flowing episodes of Ms. Marvel Season 1, and their lives are also unveiled. The final episode leaves the audience burning with questions that need an answer.

ClanDestines were Exiled – But Why??

The fans do not know why Aisha, Najma, and other converts had to move out of the Noor Dimension. The fans were just told that they were exiled. But the whereabouts of it are still not known.

Do Carol and Kamala switch places? But how?

Many theories are rotating around the Nega-Bands and how they tie Carol and Kamala together.

Carol is seen wearing one such band when she is seen in Kamala’s bedroom during the post-credit scene. But the fans are still wondering how the bangle reacted the way it did.

Nega-Band AKA Bangle – What is this – A Gadget or Something???

We assume it can be either some Kree tech, an artifact of the Clan Destiny made from the Noor energy, or one of the Skrull weapons. The fans are still wondering about this!!

For a few moments, the fans felt that Kamran might fall into the hands of evil and become a villain, but thanks to Kamala, he accepted the escaping idea of Kamala and met Kareem.

Now the story gets interesting as both Kamran and Kareem have some connection with our superhero Kamala. Ms. Marvel Season 1 shows the budding relationship of these both with our superheroes. This will undoubtedly lead to competition between both of them.

Though in comics, Kamala has been the famous Inhuman, she is confirmed as a mutant here on the grounds. Now the next question comes: where is Kamala headed to – Team X-Men or Team Avengers??? Ms. Marvel Season 1 has raised this important question.

Many such inquisitive questions are rising in the minds of the fans. That the answers to them can only alleviate this hunger. Ms Marvel Season 1 reflects how big a Marvel fan Kamala is, so there are many possibilities that Kamala would join the Avengers squad or lead the young Avengers Team.

We are eagerly waiting for the future of Kamala. Will it be via sequel or a flick? MCU can only solve this mystery. Follow us for more such updates.