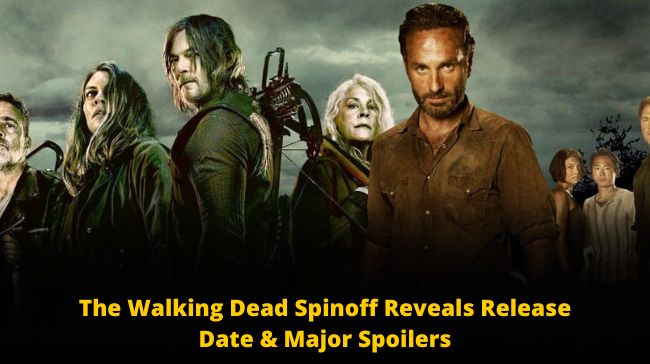 The Walking Dead franchise will experience life after death with many Tv and movie spin-offs. And we are all rolled up and excited to share with our lovely viewers everything the creators shared about the upcoming Walking Dead spinoffs.

Did you guys also feel the same as us that—The flagship The Walking Dead series is a saga and would go on forever?

Everyone knows such a big hit the TWD series was. Some casting turnover and the lack of new adaption material from Robert Kirkman’s original comic series finally spelled the end for the show after 11 magical seasons. But it’s not over yet, the franchise has a bunch of Walking Dead spinoffs in its bucket.

So, for all the loyal fans, let us say the TWD franchise isn’t going anywhere; the Walking Dead spinoffs are in the way. Yes, yes, people, we have done all the work for you to get the latest news.

Chillax, grab a cup of tea, and keep reading.

Did you know the show has undergone many changes in narrative, cast, crew, and kind of overall vibes? Tales of the Walking Dead—This is one of the most hyped Walking Dead spinoffs that will reach US screens on August 14, Sunday.

The Walking Dead Spinoff Casts X-Men and The Boys Stars!!

The new Walking Dead spinoff will consist of six original one-hour standalone episodes only centered on both new and established characters.

Each episode has its own well-defined and sharp tone, but every story has something unique to offer with unforgettable characters and with their risky life choices and situations.

It’s also said that the production started in January, and the whole team, including filmmakers, directors, and cast, have done outstanding work to bring it on air before the year’s out!

Yes, you heard it right. As the flagship show, the UK fan base will most likely be able to catch Tales of the Walking Dead over on Disney+.

The Classic Villain Makes A Comeback In Walking Dead Spinoff!!

Little is known about this, but McDermott said in an interview that “We see so much potential for a wide range of rich and compelling storytelling in this world, and the episodic anthology format of “Tales of The Walking Dead” will give us the flexibility to enter in our existing fans and also offer an entry point for new viewers, especially on the streaming platform!” Also, Negan and Maggie would be seen in the “Isle of the Dead.”

The statement from the producer Greg Nicotero is just doubling up all the excitement. He said that various drafts were made of the scripts in the last few months, and the team cast made sure they got it right. Wow, now that’s something unique—right?

The Walking Dead Spin-offs are already making everyone so curious and excited!

We can see so many viewers love the Walking Dead Universe. What do you say people—Do you think Lincoln will return as Rick Grimes? Comment in the below section what more you’re expecting to see?