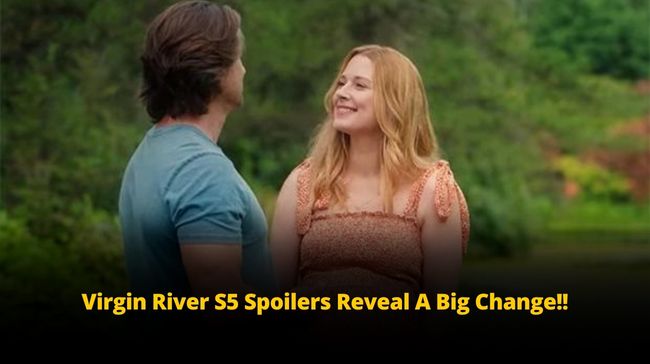 Hi,  Our Lovely and Loyal Readers,

Do you know why we love bringing trending news to all of you? Because you guys are awesome and we have a connection with you all. This is the lovely connection we feel with all of you. So grateful to have such a fantastic audience, whom we haven’t met, haven’t seen, yet feel such a strong connection to all of you! Virtual Hugs, please?

So, what do we have in our bucket today? Yea, you guessed it right! It’s some super hot Virgin River s5 spoilers. So, make sure to stay tuned!!

There’s something about Virgin River S5 spoilers that we love

They give you so much vision of what to expect from the upcoming season. It’s like you have already seen a trailer and now let the series come; at least you know what would be happening and what not.

Agreed? Ah, we are the ones who love spoilers and then spill the beans in front of other friends, who have been waiting desperately!

This time it’s all about the Virgin River S5 spoilers!!

As we all know, Virgin River is an American romantic drama TV series produced by Reel World Management and filmed in British Columbia, Canada. Based on the Virgin River novels by Robyn Carr, the first season came on December 6, 2019–After that, the love being showered by the fans was incredible, and now the story has leased to Virgin River Season 5–All set for the spoilers?

The fanbase of Netflix drama can’t wait to watch what’s next happening for Mel and Jack!!

When will Mel and Jack marry? Ah, answer us because we are waiting. As we all know, she’s pregnant; what would happen next?

Do you think Preacher can finally live his life? How is Season 5 going to lead his story? – Attention, Virgin River Season 5 Spoilers

It looks like he will figure out many things in the next season, thus making it possible for him to live his life correctly now; what say?

Is Cameron sticking around?

Are we going to see Grayson Gurnsey’s role again?

Maybe yes, maybe no. God knows what will happen. But as disclosed in an interview, we might be seeing him in the next season. God, he’s everyone’s favorite; please, we want to see more of him!

But when is the Virgin River Season 5 coming?

Ah, it’s too soon to say. But Mr.Jack revealed that the filming is underway already. The entire cast would be seen in the upcoming season. Even the trailer is not out yet, but a lot of hopes are already attached!

Don’t forget to comment below, particularly on this scene, “Will Lizzie’s love story ends in tragic pain?” Ah, these were just the Virgin River S5 Spoilers, but still, what comes next, no one knows!