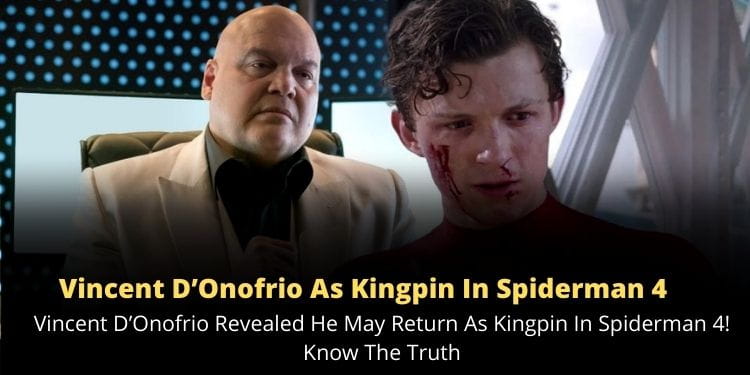 Vincent D’Onofrio wants Kingpin in Spiderman 4. Here is how the creators responded to his statement.

Spiderman No Way Home has won the hearts of the Marvel fans taking them on a roller coaster ride to the world of nostalgia. But it’s not over yet, as the fourth MCU Spiderman project is under development.

With several rumors floating around Spiderman 4, Vincent D’Onofrio, the man behind the iconic character of Kingpin came up with a big statement.

Vincent D’ Onofrio has already turned out to be a crucial part of the Marvel Universe with his appearance as Kingpin in popular ventures like Daredevil and Hawkeye. However, the actor wants Kingpin in Spiderman 4. So, will this be possible? Here is everything we know so far.

The high-school trilogy of our friendly neighborhood superhero has marked a climax and now it turns to explore the world leaving behind the identity of Peter Parker. So, there are potential chances of Spiderman’s story branching out to new sub-plots introducing new characters.

So, when it’s about new characters, there are some hot rumors floating around the Internet on the return of Vincent D’ Onofrio as Kingpin in Spiderman 4.

Kingpin actor Vincent D’Onofrio has also shown his active interest in making a booming comeback in MCU’s Spiderman 4 as Kingpin.

With the immense success of Spiderman: No Way Home, the fans are expecting some new elements of excitement in the upcoming ventures of their favorite superhero. While Kingpin, who originally debuted in Daredevil started exploring other spheres of the Marvel world, he was introduced in Disney+’ Hawkeye.

Vincent D’Onofrio made a breath-taking comeback as Kingpin nearly three years after his last appearance in Kingpin’s shoes. Though the fans were incredibly happy witnessing Kingpin back, the climax was not so entertaining.

Kingpin was murdered by the niece he betrayed, Maya, the leader of the Tracksuit Mafia. It was pretty heartbreaking for the Kingpin fans as they wanted to see him rocking the screens again.

But, we have good news for you, Vincent may return as Kingpin in Spiderman 4.

In a recent interview, Vincent D’Onofrio was questioned on which MCU characters he would like to interact with in the future. The Kingpin actor mentioned some names that will shock you.

He said, “I would like to interact with all of them. I mean, it’s obvious that Punisher, Daredevil, and Spiderman are the ones my character is tied to in the comic books. But there is plenty of room for others, I can just only hope that that happens. But I mean, Spiderman definitely. I think that would be really really fun. I want it as much as everybody does, so we will see.”

Will There Be Kingpin In Spiderman 4?

Well, as of now, nothing confirmed. However, with the active interest of the Kingpin actor, Vincent D’Onofrio we just never know.

Moreover, with the fourth movie of Spiderman under development, there are high possibilities that Kingpin may debut in the city of Avengers. With the doors of the multiverse wide open, we can definitely assume that Marvel can drop Kingpin in Spiderman 4.

In case he enters the world of MCU’s Spiderman, it would be really fun to witness both the iconic characters together on screen.

So, what do you think will there be Kingpin in Spiderman 4? Tell us in the comment box. Follow us for more amazing updates on the upcoming MCU projects.

2 thoughts on “Vincent D’Onofrio Revealed He May Return As Kingpin In Spiderman 4! Know The Truth”