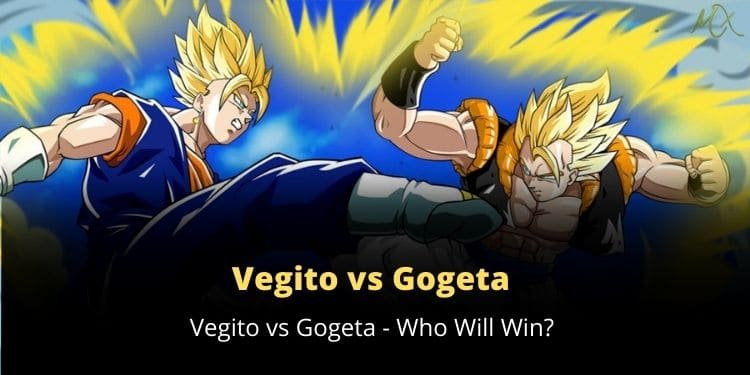 What will be the consequences of a Vegito vs Gogeta battle? Who will win? Here is all you need to know.

Fusion forms are some of the most powerful characters in the Dragon Ball series. Some characters, including the series’ two most recognizable Saiyans, Goku, and Vegeta, have various fusion forms.

During Dragon Ball Z, we witness two separate types of these Saiyans merge using two different techniques. Goku and Vegeta do the fusion dance to transform into Gogeta. Alternatively, these two figures may be fused into Vegito by wearing the Potara earrings.

Though each of these types is incredibly strong, they have significant variances. The fans have been attempting to find out who will be the winner in a battle of Vegito vs Gogeta. Here, we have also tried to figure out the same.

Goku and Vegeta, each donning a Potara earring, are drawn together to produce Vegito in a magnificent burst of light. For the Kais, the fusion is eternal, but it only lasts an hour for humans. Vegito is a more confident, vengeful character than Goku, with a mentality more akin to Vegeta’s. He retains both Goku and Vegeta’s memories. Even after Majin Buu has taken the energies and talents of Gohan, Piccolo, Trunks, and Goten, Vegito easily defeats the monster but later surrenders himself to be absorbed in order to save his kids.

When challenged with Fused Zamasu (an evil deity in a volatile fusion with Goku from another realm), the two Fused combatants fight to a halt, with Vegito barely outmatching Zamasu as the fusion breaks out prematurely due to energy depletion.

On the other hand, Gogeta is produced when Goku and Vegeta execute the Metamoran fusion dance after matching their individual strength levels to make the merging easier. Before “Dragon Ball Super: Broly,” all of Gogeta’s previous looks, like in the animated movie “Dragon Ball Z: Fusion Reborn” and “Dragon Ball GT,” were non-canonical.

While Gogeta retains Vegeta’s arrogance, he is a much more smart and practical combatant in both anime flicks. Gogeta only appears in one scene in “Fusion Reborn,” fearlessly enduring an epic blow from Janemba before obliterating him totally with a single energy blast.

The last Shadow Dragon, Omega Shenron, was easily knocked by Gogeta till the fusion faded away before he could execute the death blow. Gogeta fights the Legendary Super Saiyan before defeating him as a Super Saiyan Blue in Broly.

Vegito is the most powerful character in the original Dragon Ball manga and one of the strongest characters in the whole series. As a merged Saiyan, his strength is derived from Goku and Vegeta’s combined strength and multiplied many times. Consequently, the more powerful each Saiyan is, the more powerful the merged fighter will be. He is one of the series’ deadliest fusions, along with Fused Zamasu, Kefla, and Gogeta. Here are some of the deadliest abilities of Vegito that are going to be the key factor for determining who is stronger in the Vegito vs Gogeta fight.

Complete Shot – Vegito smacks the adversary twice in the stomach as he screams, “The fun starts here!” Then he knocks them away with a punch to the chin. Ultimately, Vegito goes after the enemy and strikes them in the abdomen again and again very quickly, causing significant damage. This move is one of Vegito’s Super Attacks and was titled in “Dragon Ball: Raging Blast.”

Banshee Blast – Vegito bends forward and aims his right hand’s five fingers towards the opponent. Then, on the tips of each finger, he builds up five miniature golden-yellow energy spheres, which he launches at the opponent, causing significant damage. Scatter Finger Beam is the name of this technique in the “Budokai Tenkaichi” series (As a charged ki strike, it is more evident in “Tenkaichi 3”). Split Finger Shot is its name in “Dragon Ball Xenoverse.”

Big Bang Kamehameha – Vegito raises both palms forward, charging a blue energy orb that he launches at his opponent. On a hit, the strike bursts and does tremendous harm.

Instant Transmission – It is a method for traveling huge distances in a short amount of time. This motion is often followed by Vegito putting his index and middle fingers on his forehead to improve concentration; but, if sufficient time is taken, the method may be completed without this aid.

Gogeta is seen in Dragon Ball GT capable of defeating Omega Shenron, who had previously defeated Super Saiyan 4 Goku & Vegeta. Gogeta claims that he could beat Omega Shenron with a single finger if he wanted to.

His ki command is so precise that he can turn Omega’s Negative Karma Ball’s existence into positive energy. Gogeta was at least twice as powerful as Omega Shenron since he took no damage from his assaults.

Despite his clear advantage against Omega Shenron, Gogeta’s might prove to be a downfall as the merged Saiyan’s tremendous strength exhausts due to the technique’s time restriction. Here we have mentioned some of his strongest abilities of Gogeta which will be counted in the Vegito vs Gogeta confrontation.

Punisher Drive – While invisible, Gogeta slips forward and attacks the opponent with Rapid Movement. If the assault is effective, the opponent receives many invisible punches, and Gogeta emerges behind them.

Ultimate Impact – Gogeta rushes at the enemy and punches them in the stomach, then throws them high into the air with a bicycle kick while yelling, “Here goes!” He then leaps up to the adversary and assaults them with a flurry of hard kicks and punches executed at a breakneck speed.

He then appears from behind the adversary and kicks away from the opponent after elbowing them in the face. Finally, Gogeta teleports over his enemy and hooks them into the floor, causing immense damage.

Big Bang Kamehameha – To begin, Gogeta places both his arms next to him, palms open and arms turned up at a 90-degree angle. Then he merges the Super Kamehameha’s massive energy into a Big Bang Attack, which bursts into an extraordinarily strong flood of ki. This ability can provide some advantage to Gogeta in a Vegito vs. Gogeta fight.

Meteor Explosion – Gogeta initially powers up before charging towards his opponent and hitting him three times. Gogeta fills his adversary with his own ki with the last third punch before kicking him into the air. Gogeta then lifts and crosses his arms before detonating the ki inside the foe’s body in a horrific thermonuclear-like blast.

Vegito Vs Gogeta – Who Is Stronger?

It is vital to remember that both fusions are time-limited: Gogeta by 30 minutes and Vegito by an hour. This appears to give Vegito the upper hand at first appearance, but the Potara fusion is also constrained by power consumption. While Vegito had plenty of time to kill Zamasu, his fusion was stopped short by a huge assault he had launched on the renegade deity.

Similarly, GT had demonstrated that excessive energy use might reduce Metamoran fusion, and due to this, Goku would be unable to maintain his Super Saiyan 4 form long enough to complete the fusion with Vegeta. However, considering the non-canonical status of that anime series, it is questionable whether this is legitimate to think in that way.

While Vegito can continue a fight with a deity for some time, Gogeta’s fight with Broly is so enormously strong that it creates shockwaves that shatter across many dimensions, making it an unrivaled achievement in the Dragon Ball series to date.

A single devastating hit in the anime film “Dragon Ball Z: Wrath of the Dragon” hinted that a single blow might be enough to fracture a fusion prematurely; however, it is unclear whether this applies to Gogeta only.

Similarly, the manga said that if the Potara earrings are damaged, the fusion will stop prematurely, as witnessed with Kefla’s downfall in Dragon Ball Super’s “Tournament of Power,” although this was not seen in the anime.

Gogeta looks to be the most deadly in Vegito vs Gogeta confrontation, seemingly unrestrained by power consumption but also having half the time and enough strength to burst across realms.

While Vegito may potentially live twice as much time as his Metamoran counterpart, he can not utilize his immense powers fully without risking the fusion ending prematurely. And, in a series based only on escalating power levels, Gogeta’s limitless potential is what gives him the upper hand.

For the simple reason that Vegito’s power utilization limits him, Gogeta is the strongest of the two fusion forms. After they enter SSBSS, Vegito’s one-hour time restriction is drastically reduced during the battle with Zamasu.

On the other hand, Gogeta has a 30-minute restriction on his form; however, he may reach full strength within that period, as shown in the current “Dragon Ball Super: Broly” movie.

Things are quite competitive in terms of power. However, Gogeta at least does one amazing feat in the franchise’s history, destroying universes with the power’s shockwaves when fighting Broly. It is difficult to gauge their strength since they get stronger alongside Goku and Vegeta. They are at their most fearsome state to date when the Broly conflict takes place.

Maybe Dragon Ball Super will clarify which form is greater among Vegito vs Gogeta in the future, but for now, considering the limitations of Vegito’s form, we will presume it is Gogeta.

So, we hope now you know who will win in the battle of Vegito vs Gogeta. Share your views on who you think is the most powerful character?

Follow us for more updates and bookmark our page to get all hot anime news first.