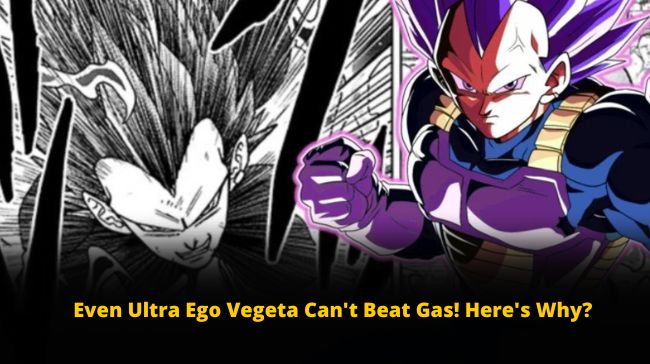 The prince of Saiyan, Vegeta, has finally revealed his new form against the most robust villain Gas.

In the preview of Dragon Ball Super episode 85, Vegeta has been in a fierce battle against the enemy Gas. After a significant number of punches from Gas, the Saiyan prince has transformed himself into the ultra-ego form.

Vegeta Ultra Ego form is the most potent form till now for the Prince. Fans have gone crazy after seeing this new transformation of Vegeta.

They have been badly waiting for Vegeta to reveal something which helps him surpass the power of Goku.

For a long time, a battle has been going on between both of them, who is the sturdiest. However, Goku always managed to stay ahead of him. Vegeta’s Ultra Ego form can fulfill his expectations. However, it can’t beat Gas!! Here’s why?

A glimpse of Dragon Ball Super Episode 85: Vegeta’s Ultra Ego At Its Best!!

In the Dragon Ball Super episode 85 preview, Vegeta has been taking several blows to reply to Gas with even more strength.

However, Gas has stolen some of the techniques of Goku and has been using them against Vegeta.

The instant transmission is operated by Gas against Vegeta’s Ultra Ego form. He has been using instant communication to teleport himself and Vegeta. An obstacle is created in front of Vegeta to use his powers properly.

Even his most extraordinary form seems to be purposeless against the forces of Gas. The Vegeta Ultra Ego Form created chances for the Saiyan to win the battle. But episode 85 seems to have other plans.

There is more to come:

The disclosure of Vegeta’s Ultra Ego has made the fans go mad. Finally, after so many years can expect their price Saiyan to level the energy of Goku and also beat Gas at the same time.

In the Ultra Ego form, the host gains more and more strength by the amount of beating he takes. This could prove to be a great asset in defeating the Gas.

However, the cunning approach of Gas by using the Goku hallmark techniques has made Vegeta’s Ultra ego form an utter waste. The disappointment level in Vegeta fans has reached its peak; who wanted him to outplay Goku.

The official preview page has stated that “there is something else going on here that only Goku can sense,” interpreting that the fight between Vegeta and Gas is not as unfair as it seems.

The acceptance of Goku and Vegeta for their Saiyan legacy has proved they are in the best shape. However, something is absent before they can bring down Gas.

The upcoming episode will clear the question of what Goku and Vegeta have to do to conquer the greatest villain the Dragon Ball Universe has ever seen!