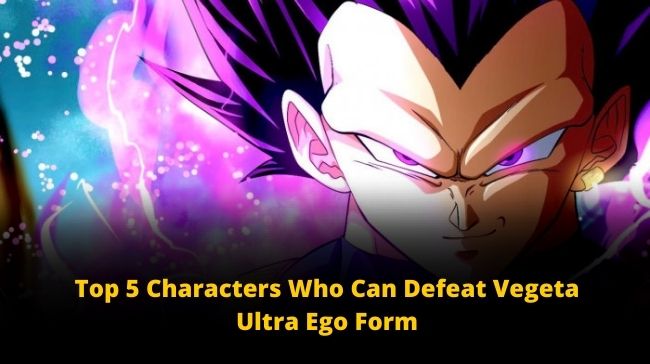 All Dragon Ball fans bow down as the Prince of Saiyan has arrived. Vegeta has officially unlocked his Destroyer form, Ultra Ego, in the manga. Vegeta Ultra Ego form is dominating the manga and the fans have gone crazy over his new form.

Though his new form appears incredibly destructive and it seems he can turn any opponent into ashes, there are a bunch of anime characters who can easily overpower Vegeta Ultra Ego form, even if in their base form.

So, today Sassyshows is here with the top 5 anime characters who can defeat Vegeta in Ultra Ego form –

The Angel of Universe 7 is no doubt one of the strongest entities in the Dragon Ball Universe. While the series has not yet showcased the true abilities of Whis, we still know he may be inevitable, being the master of a God of Destruction.

Though Vegeta Ultra Ego form is insanely powerful, he learned it from Beerus. So, Whis being the mentor of Beerus, it’s pretty obvious that he is leagues above the Destroyer.

Zeno is the Omni-King hailing from the Dragon Ball Universe. He is one of the strongest characters, who can erase anything and everything within a blink of an eye. This makes Zeno leagues above Vegeta Ultra Ego form.

Zeno has the ability to juggle with timelines, and he can even destroy Vegeta within seconds.

Though Vegeta Ultra Ego form is pretty compelling, he cannot defeat the Grand Priest with it. Dragon Ball is yet to reveal the true powers of the Angels and the Grand Priest.

Truth from the Alchemist is eternal, omnipotent and omniscient. The closest entity in Dragon Ball with these abilities is Zeno. So, it’s pretty obvious that Vegeta stands no chance against him.

Truth is above the league of the Gods. So, Vegeta Ultra Ego form cannot face such power.

The new Dragon Ball Super manga villain, Gas, is turning the tables in the latest chapter. It has definitely proved himself to be one of the strongest foes of the Saiyans. Even Goku, in his Ultra Instinct form and Vegeta in his Ultra Ego, are collectively struggling against Gas.

Though the Saiyans will surely surpass the foe in the future, Vegeta alone stands no chance against the fiercest Dragon Ball villain.