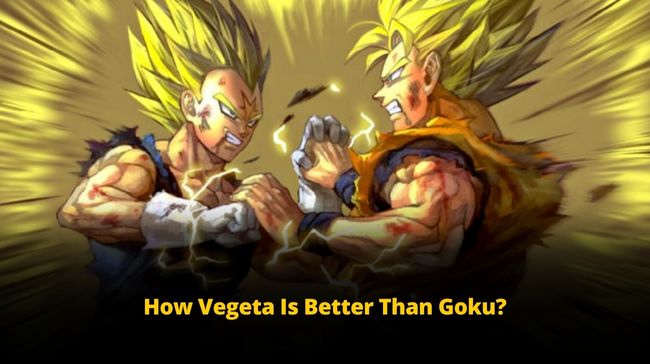 Vegeta is better than Goku!!

Being of the same race, they are still entirely different from each other. At the power level, no one can beat Goku. He is considered the strongest warrior in the Universe, apart from the Gods.

Vegeta, though a little less strong than Goku, has different things that make him better.

Yes, while fans believe Goku is far better than Vegeta in terms of power… There are several other ways in which Vegeta is better than Goku!! Here are some…

In what ways Vegeta is better than Goku?

Goku and Vegeta belong to the Saiyan race but have different pros and cons.

For instance, Vegeta is a good teacher in comparison with Goku. We know this when the fight between Universes 6 and 7 happened in which he faced Cabba the Saiyan from the other Universe.

Cabba was shocked to see Vegeta’s power and wanted to achieve the same level as him. He requested Vegeta to help him teach the same, but he refused.

However, in the end, he did help him by completely breaking him emotionally and mentally.

He said things that raised his anger level to the charts, ultimately turning him into Super Saiyan. This proves that though his ways are harsh, he has a way of achieving his objective.

Piccolo views how Vegeta is better than Goku

Piccolo has been in the story of DBZ since the beginning and has also played an essential role in the Dragon Ball story. He is the trainer of Gohan and helps him achieve heights he never imagined.

From his childhood only, Piccolo trained him and was satisfied to become a great fighter.

Though Gohan’s wish was to get trained by his father, Piccolo thought they were different.

According to him, Goku is an excellent fighter but not a good teacher. He is always focused on improving his strength and never gets time to teach others. While on the other hand, Vegeta can pass on the knowledge he has acquired to the next generation.

While in the case of Goku, even if he were asked to train others, he would take it casually and end up having food. Which is technically his benefit.

Conclusion of how Vegeta is better than Goku

After considering all the facts, we could say that in the case of being a teacher, Vegeta would score higher than Goku as he believed in passing on the knowledge to the younger generation.

At the same time, Goku has never given any significant thoughts on this. Fans were excited after finding that although Goku surpasses Vegeta in the power level, in the case of being a Master, Vegeta surpasses him with a vast difference.