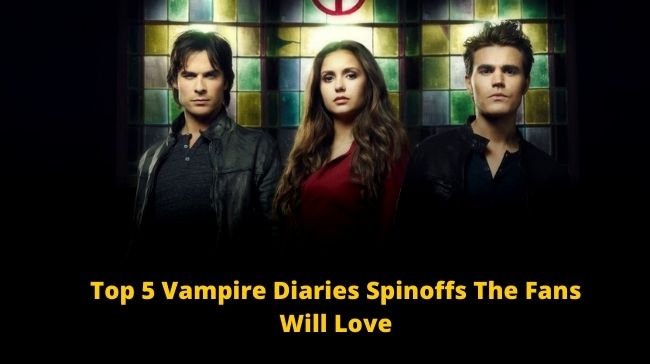 Netflix is known for delivering something out-of-the-box to the fans. So, while the fans were amazed by the incredible series, the Vampire Diaries, Netflix, came up with some super intense Vampire Diaries spinoffs to amaze the fans.

The Vampire Diaries was made in the town called Mystic Falls in Virginia, a town that is filled with supernatural legends.

The show follows the story of Elena Gilbert (Nina Dobrev) a teenager who just lost both parents in a crash and finds herself in love with the 162-year-old vampire Stefan Salvatore (Paul Wesley). The Vampire Diaries was telecasted for the first time on the CW’s broadcasts and many were skeptical about the show as just an attempt to make money from the massive popularity of The Twilight Saga. There’s something incredibly satisfying and appealing about seeing Stef portraying his evil persona.

In the 1920s along with Klaus, Rebekah, and others we are sure they did a lot of interesting stuff. We have always been a huge fan of the flashbacks in the TVD series, so the thought of Vampire Diaries spinoffs that focus on the characters from back in the past will make the fans very happy.

The Saltzman Family’s Life between the Vampire Diaries and Legacies

Caroline along with Alaric were the main characters of the show, The Vampire Diaries, and they are now the main protagonists of the show Legacies.

While the show’s mother offered a few glimpses into the life of the Forbes-Saltzman family, it would be fascinating to learn the transition of the whole group from one show to the other.

It would be great in bridging the gap between the original Vampire Diaries to its current spinoff and a show which has a story set in this period can answer a lot of questions that viewers have regarding what happened to the whole cast of The Vampire Diaries in the period.

The History of Mystical Falls

Mystic Falls is almost like an episode of the Vampire Diaries rather than an actual setting.

Since this small Virginia town has been the center of supernatural activities for more than 1,000 years, it’d be fascinating to explore the full scope of the town’s history.

The creation of the Founder’s Council is one of the Vampire Diaries Spinoffs ideas that is very captivating, and even a show set in the time of the Mikaelson family holds plenty of potential too.

There is something mysterious about this particular location, but people would certainly like to know the reason that is it that makes Mystic Falls so special.

Also Read – Will There Be Another Vampire Diaries Spinoff Show?

Stefan’s journey from Mystic Falls In 1864 To the Present Although Damon Salvatore is arguably the most well-known character from the Vampire Diaries universe, Stefan isn’t too far from the top.

But, even more, his character’s growth and his role as an on-then-off the wagon Ripper seems to have better potential for Vampire Diaries spinoffs based on Damon.

The Originals mostly focused on the present-day story but since Legacies is now the mainstay of The Vampire Diaries’ universe, it’s like The Originals was just Hope Mikaelson’s story of origin.

The Mikaelsons existed for more than a millennium before the Originals started the show only touched an idea of the potential.

A period drama focused on the Originals throughout history would make an intriguing basis for a television series.

So, fans, which Vampire Diaries spinoff do you want from the list above? Tell us in the comment box.

4 thoughts on “Top 5 Vampire Diaries Spinoffs The Fans Are Dreaming For!! ”