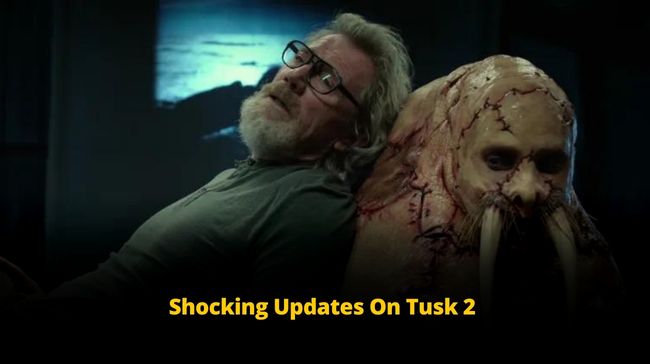 Tusk is all set for a sequel with all new plans for another horrific storyline, and Kevin Smith confirms all this!!!

Kevin Mail was through a  heart attack a few years ago, and since then, the filmmaker has been all set to do what he wants to do in life!! He owns some cheap movie titles to his name, like “Jay and Silent Bob Reboot,” but this time, this guy is all set to do something unexpected!! He is gearing up for a sequel to his walrus horror movie from 2014!! And this could be Tusk 2!! Yes, fans, this is serious!!

Lex Confirms It Too!!!

Our much beloved Les Briscuso, too, confirmed during a talk with Justin that Kevin Smith is toying with the idea of building a sequel to Tusk 2!

The fans would be pondering why to go for Tusk 2. Why would Kevin Smith do it? Things like this?? The love Tusk was an end in itself, not calling for a sequel by any chance!! Tusk was a pure bizarre body horror movie and proved a flop at the box office by making merely $1.8 million! Piracy could be a reason, but we are not sure of it!!

Well, the thoughts are different at the other end! There is a version of Tusk 2 where the movie will cut to the present, and somebody else might get sucked into the spider’s web!

SoSmith feels there would be a way where Justin and Wallace will take Michael Park’s character and might become the new Howard Howe!! This could-be story plot of Tusk 2!!

Per Kevin Smith’s details, Tusk 2 will be called the Tusks, and it should be on the silver screen anytime by 2024!!

Yoga Hosers is a sequel to Tusk???

No fans!! Not at all!!! Yoga Hosers is a spin-off of Tusk starring Johnny Depo, his daughter Lily-Rose Dep, and Smith’s daughter Harley Quinn Smith. The film was screened at midnight during the Sundance Film Festival!!

Is Tusk Based On A True Story!!

No fans!! The Tusk is not based on a true story as claimed humorously by the film!! It is a comedy horror by Kevin Smith where a man is surgically transformed into a walrus!!

The movie Tusk was an R-rated film due to some disturbing violent scenes and sexual content. Tusk was also reviewed to be an awful movie! We thought the fans never expected a sequel coming for Tusk, but Kevin Smith has surprised everyone by announcing a sequel to Tusk!

Let us hope it is better than the Tusk!! Follow us for more such updates!!