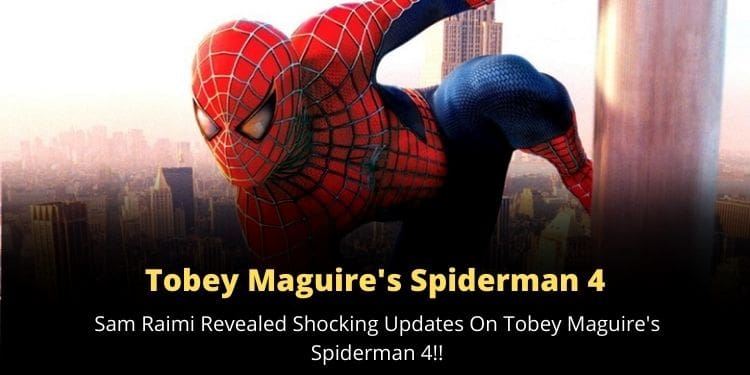 With different rumors and tweets on the much-anticipated Tobey Maguire’s Spiderman 4 floating around the Internet, recently, Sam Raimi, the scriptwriter of Tobey’s Spiderman passed some shocking statements. Sam revealed that the script of Spiderman 4 featuring Tobey Maguire was ready before the officials canceled the project back in 2010. So, will it be able to see the daylight?

Sony Entertainment got a lot of recognition with the introduction of Spiderman. Tobey Maguire was the one who pushed the franchise and with his insane performance as Spiderman, the popularity of Sony skyrocketed.

However, Spiderman 3 received mixed reviews from the critics and Sony ultimately shelved the series. But, recently with the re-introduction of Tobey Maguire as Spiderman in the latest MCU movie, Spiderman: No Way Home, the fans have gone crazy. They are simply dying to see Tobey back on their screens as Spiderman.

With the fans curious to know about the next Spiderman venture featuring Tobey Maguire, Sam Raimi, the popular scriptwriter has revealed that the official script of Spiderman 4 was ready, much before Sony shelved the series. Tobey Maguire’s Spiderman 4 was supposed to be dropped sometime in 2011. However, the officials took their own decision to postpone the release and ultimately canceled it.

While Tobey Maguire’s Spiderman 4 was canceled, the movie managed to totally complete its screenplay. James Vanderbilt, the writer behind Amazing Spiderman 1 and 2 revealed that the full script of the movie was completed. Moreover, the franchise hired new writers to add a pinch of freshness to the script and polish it to make it perfect. However, later Sony dropped its decision to surprise the writers.

James said, “Yeah so, Spiderman 4, we had a full script ready to go, and, as is sort of the case when you are working as a feature writer, they brought in some other new writers to punch it up. They changed some points, and I think about a year later, they got to a point where – and I don’t even know why – but they got to a point where they announced that was not the road they were going to go down.”

As things went out of hand, both Tobey Maguire and Sam Raimi left the project. So, Song decided to simply have a fresh start. They rebooted the complete story with Amazing Spiderman introducing Andrew Garfield as the new hero. Later the character of Spiderman was moved to the MCU and Tom Holland picked up the role.

Why Was Tobey Maguire’s Spiderman 4 Canceled?

The cancellation of Spiderman 4 was heartbreaking for all the Spidey

fans. While most of the fans blamed Sony for not redeeming a new season, they were craving to see Tobey and Sam Raimi’s pair back with a new Spiderman venture.

As per the sources, Sony had to take the call of shelving Spider-Man 4 as they were not satisfied with how the movie series was going or how the story was taking a new shape. Moreover, Spider-Man 3 got mixed reviews from critics.

What Would Have Been The Plot Of Tobey Maguire’s Spiderman 4?

As per the statements from Sam, in 2010 he initially planned to introduce the Vulture as a new threat to Spider-Man. Moreover, he said, he was eager to pick John Malkovich for the role. However, ultimately Sony rejected the offer as they were eager to introduce the Lizard as the new villain. So, with tons of disagreements, Sam Raimi believed that he would not be able to deliver the same amount of success and stardom the other two installments got. So, ultimately the project was canceled.

Will There Be Tobey Maguire’s Spider Man 4 In The Future?

With the appearance of Tobey Maguire in the latest Marvel movie, Spiderman: No Way Home, the fans are excited to see him again suit up in the Spidey costume. The unlocking of the doors of the multiverse allowed the old actors to jump into the MCU. However, in the end, they had to return to their own timelines.

But the reintroduction of these characters has ignited the rumors that there may be a new movie featuring Tobey Maguire. So, will there be Spiderman 4?

Well, with Tobey’s reintroduction as Spiderman, it’s pretty clear that he is still one of the fan-favorites. So, it’s possible that Sony will pick up the racked script and make some really awesome changes to deliver Spiderman 4 to the audience. In that case, the new movie may deal with a piece of the family life of Spiderman – his wife and daughter.

So, what do you think will Sony pick up Tobey’s character to drop Spiderman 4 or will it be Andrew to make a return with the Amazing Spider-Man 3? Share your thoughts in the comment box. Follow us for more interesting updates on the latest movies and series. Bookmark our page, so you don’t miss out on any updates.