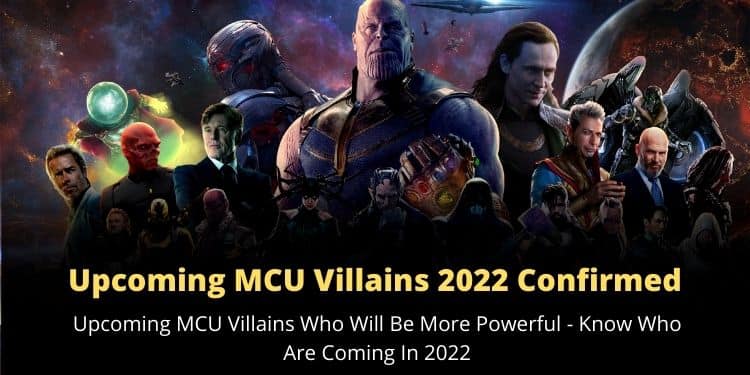 With Spiderman: No Way Home, one thing that is pretty clear is that till the concept of multiverse flourishes in MCU, we can expect all characters to land, anytime. Everyone loves to see their favorite MCU characters hassling in battles, showcasing their abilities.

However, one factor that makes the MCU movies or series super-entertaining is the entry of villains. So, who are the upcoming MCU villains? Will the old bad guys like Doctor Octopus return or will we see new evils like Mephisto? Here is everything we know so far.

Though most fans title the superheroes as the one who deserves the credit for the immense popularity of the Marvel Cinematic Universe, it’s been the Marvel villains who pulled off the plot to deliver breath-taking performances.

In the past few decades, Marvel has introduced the most awesome villains. All MCU villains carry the perfect blend of courage, powers, and brain. Whether it’s the God of Mischief, Loki, the super-powerful Vulture, or the infinity stones hunter, Thanos, MCU has always stunned the fans with a new villain.

However, the latest MCU movie, Spiderman: No Way Home introduced the concept of the multiverse and dragged in some old villains to the scene. With the movie wrapping up, the fans are pretty curious to know about the upcoming MCU villains.

The next movie in line is Doctor Strange: Multiverse of Madness. So, will the creators pick the old villains from different universes or introduce some much-awaited characters from the comics?

Let’s dive in to explore more about the upcoming MCU villains and see the potential evil characters that may appear in the next marvel venture.

Originally appearing in the first Doctor Strange movie, Baron Mordo got a million praises for his incredible performance. However, after 2016’s movie, he was left unaddressed by MCU till he appeared in a post-credit scene. The fans are dying to see Baron Mordo back on the screens. Chiwetel Ejiofor plays the role of the MCU villain. Finally, it seems the creators are ready to bring him back to MCU as he has seen him hunting for the sorcerers to steal their abilities. So, it’s pretty obvious, the character of Baron Mordo may come back in Doctor Strange: Multiverse of Madness.

If you want to know all the characters which may appear in Doctor Strange: Multiverse of Madness, click here.

Though Kang the Conqueror is no match to the popular villains like Thanos, in terms of powers, he is still one of the deadliest threats to the MCU heroes. Kang the Conqueror is incredibly powerful and he is an energy eater. Kang utilized the technology invented by Doctor Doom to navigate between time to enslave mankind.

As per the latest leaks, Kang the Conqueror will be debuting in Ant-Man and the Wasp: Quantumania, which is scheduled for a 2023 release. Moreover, sources also suggest that he may play a cameo role in the upcoming movie, Doctor Strange: Multiverse of Madness.

Since 2011, Thor has been one of the important marvel characters. He has fought tons of villains like Loki, Mad Titan, Hela, and more. However, one of the upcoming MCU villains who can turn out to be a major threat to Thor will be Gorr the God Butcher. The new villain will debut in the upcoming Marvel venture – Thor: Love and Thunder, which will drop on May 6, 2022. While the fans may be excited to see this upcoming MCU villain, many may be curious as to who Gorr the God Butcher.

Gorr was a creature born on a lonely and nameless planet. While Gorr was a young lad, his parents were assassinated, leaving him alone in this harsh world. Later, Gorr tried to cope up with all the odds and married a lady. The couple was blessed with a child, Arra. However, his wife and child came with the same destiny as his parents. They were also killed in a natural calamity. This fueled anger and hatred of Gorr towards the Gods. Gorr murdered every God in his way and eventually, Thor is the one who came across Gorr. So, will this be the end of Gorr?

With the doors of the multiverse wide open, we may expect some unexpected guests appearing in the next Marvel movie, Doctor Strange 2. With fans curious about who will be the upcoming MCU villains, the creators may actually re-introduce the Ultrons.

As per the sources, Ultron Sentries may actually return in the upcoming movie. While their roles are clearly unclear, they will add thrill to the plot. Rumors suggest Ultron hailing from Avengers: Age of Ultron will be back with new abilities to turn out to be a major threat to Doctor Strange.

Luke, a deadly and evil variant of our fan-favorite character, Scarlett Witch may appear in the Doctor Strange: Multiverse of Madness movie. The latest trailer of the movie reveals Lore as an upcoming MCU villain as it includes multiple versions of the character.

Lore is an evil variant of Scarlet Witch hailing from another universe. She is a true nexus just like Wanda. However, Lore’s motives are different. She is on a mission to conquer dimensions and destroy all other nexuses.

Marvel Villains Who Must Show Up In MCU

Marvel has introduced tons of characters coming from the world of darkness. However, there are a few deadly baddies from the comic that the fans crave to witness. So, here are some of the Upcoming MCU villains that must show up quickly –

All rumors aside, it seems the Marvel creators are weaving new strategies to explore the world of darkness. With movies like Doctor Strange: Multiverse of Madness, Blade, and Moon Knight lined up they are trying to introduce some dark characters from the comics.

So, when it comes to comics, how can we miss Mephisto in our list of upcoming MCU villains. Mephisto can be the perfect villain to resemble the Hell and Earth conflict. Therefore, we can expect the entry of Mephisto in the Marvel Universe really soon.

The introduction of Julia Louis-Dreyfus’ Contessa Valentina Allegra de Fontaine in MCU highlights that the creators are crafting their own version of the suicide squad. So, it will be interesting to see whether the MCU will introduce the Thunderbolts or not.

Galactus is one of the Thanos-level threats to the Avengers. While it’s pretty obvious that the creators will not introduce such a giant evil so quickly, the fans are expecting the entry of Galactus in MCU.

Galactus is originally a Fantastic Four Villain who debuted back in 1966. However, the character has not been efficiently used by the creators since then. So, we can expect the character to debut in the future.

When it comes to one of the classic villains from the Marvel world, one name that always shines out is Red Skull. He was introduced as a counterpoint to the fan-favorite Captain America. So, Red Skull’s comeback in MCU will be bombastic for all fans.

The next upcoming MCU villain who must make his entry soon is Doctor Doom. He is one of the smartest characters in the Marvel Universe. Unlike most villains who possess insane strength but lack mental power, Doctor Doom is a combination of both.

Doctor Doom though appeared in three movies, he is one of those deadly villains who deserve a proper solo film as a villain. So, let’s hope Marvel adds Doctor Doom to the list of upcoming MCU villains.

Q1) Who Is Marvel Next Big Villain?

Ans – The upcoming MCU villains list includes – Lore, the evil variant of Scarlett Witch, and the other threats coming in Doctor Strange: Multiverse of Madness.

Q2) What Villains Are Coming To The MCU?

Ans – Some villains who may debut in the upcoming Marvel ventures are – Gargantos or Evil Doctor Strange, Black Panther, and Gorr the Butcher.

Q3) Who Will Be The Villain In Avengers 5?

Ans – As per the rumors, the upcoming MCU villain in Avengers 5 will be Galactus.

Q4) Will Ultron Return To MCU?

Ans – As per the leaks floating around the Internet, there are high possibilities that Ultron may make a booming comeback in Doctor Strange: Multiverse of Madness.

Q5) Can Vision Come Back?

Ans – Vision was murdered by Thanos in Avengers: Infinity War. However, Elizabeth Olsen managed to drag him back to the living world in Wanda Vision.

What do you think, which upcoming MCU villain from our list will enter the Marvel World? Will it be Mephisto or Galactus or anyone else? Let us know in the comment section.

Follow us for more interesting content on MCU and bookmark our page to get all updates first.