What Is Coming Next In The Dishonored Series?

The Dishonored games are among the best immersive stealth simulators available, but the franchise’s future is still a little uncertain.

But the fans are waiting for something new. So, what’s new in the Dishonored series? Here is all we know.

The Dishonored series currently appears to be enjoying a well-deserved rest. Although Arkane Studios’ immersive stealth sim has only had two mainstream releases and a sizable DLC in the form of Death of the Outsider, it has left a lasting influence on the AAA landscape.

The popularity of the Dishonored series games has helped Arkane establish a reputation as one of the most cutting-edge development firms operating today because of its beautiful and tenaciously built homage to everything stealth and steampunk.

The external issues have major implications for the Dishonoured series while the Arkane studios are venturing into new areas to explore.

Fans of the Dishonored series might have to wait a while before they see the series return as Arkane’s new release Redfall has gone on hold due to Microsoft’s acquisition of Bethesda.

Is Arkane out of money?

According to hearsay, time and resources appear to be the biggest obstacles to a new Dishonored series.

Arkane clearly put a lot of time, effort, and money into Deathloop, and many now expect the studio to go the same route with Redfall.

There’s no guarantee that the studio will have enough resources to produce an entirely new Dishonored game at the moment.

This is not to imply that a new entry has been absolutely ruled out. As the source of the game’s supernatural powers was ultimately killed off in Death of the Outsider, it appeared to wrap up the entire series plot, which sparked media conjecture that this marked the end of a delightful but relatively brief gaming chapter.

Impact of Microsoft’s acquisition of Bethesda on the series

Well, there is the question of where Bethesda, the company that published the original games, fits into all of this?

One of the significant turning points that signaled the beginning of the so-called Studio Wars was Microsoft’s acquisition of Bethesda.

At the time, large corporations and conglomerates were acquiring sizable publishing studios in an effort to get exclusive rights to well-known franchises.

When Sony and Microsoft competed to acquire the most prominent names in the market, the former won the race and ended up purchasing Bungie. In contrast, the latter acquired Activision-Blizzard and ZeniMax, the holding company that controls Bethesda.

Arkane and Bethesda- Putting their affairs in order 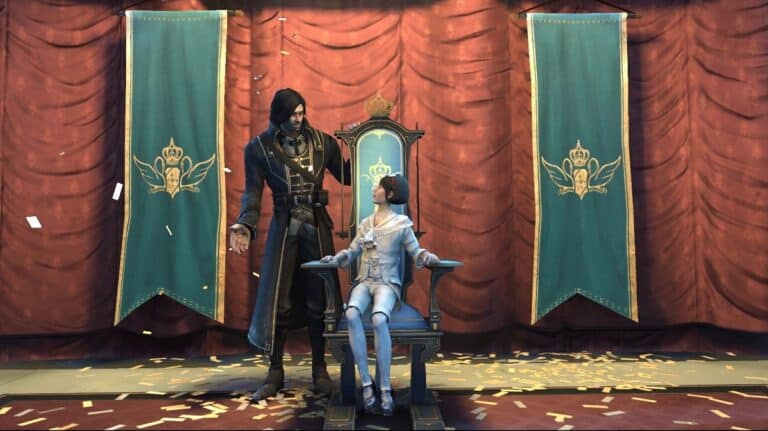 Truth be told, Arkane Studios and Bethesda are currently getting their own affairs in order even though there is still a significant demand for a new Dishonored game.

Although Arkane hasn’t ruled out the prospect of another game, it’s likely that Redfall’s postponed release will take priority over everything else.

While everything is going on, Bethesda and Microsoft will need to decide exactly how and on what platforms a new game will be released.

We should warn fans that you shouldn’t anticipate a return to Dunwall or Karnaca anytime soon since what’s going on between the biggies, all of these ideas are still merely hypothetical at this point!

Until then, let us know in the comment box which Dishonored series is your favorite?

Read More –  Scorn Release Date Is Out: Sneak Peek To All Weapons & Gameplay!!