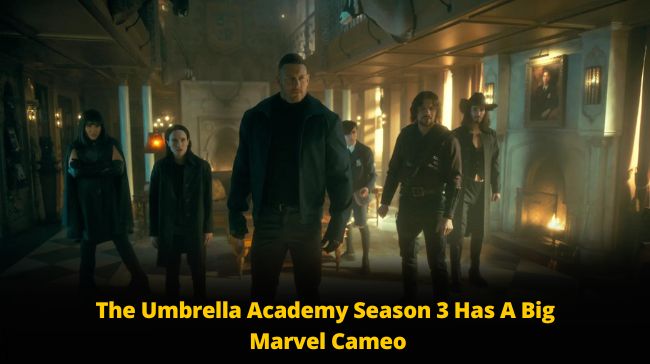 The most loved top show on Netflix, “The Umbrella Academy”  is back with its final season 3.

If you’ve watched it, did you notice the Umbrella Academy Season 3 Marvel Cameo? The Umbrella Academy boss Blackman opens up about the secret Marvel cameo that you might have missed & our article is going to tell you about it in detail. So, make sure to read the complete article!!

The story of Umbrella Academy season 3 follows the ending of Season 2. The season picks up where the previous season left off, with the characters dealing with the aftermath of the apocalypse.

After saving the world from the apocalypse of 1960 Dallas, they return to the present period & find that in the present world they have been replaced by another set of teams known as the Sparrow academy.

Fans were also able to see how Sissy’s son caused the moms of the Academy to pass away, which led to the development of the terrifying Kugelblitz.

Umbrella Academy Season 3 Marvel Cameo: Season 3 Kicks Off With a Dance-Off From Guardians of the Galaxy!!

The third season of The Umbrella Academy begins with its stars confronting The Sparrow Academy. Superhero teams frequently clash when they first meet, and since neither team is particularly adjusted in this situation, a battle was to be expected. It’s funny how the first episode of The Umbrella Academy season 3 subverts this with a surreal dance-off with the Sparrow Academy.

In a hilarious parody of Guardians of the Galaxy, Diego even imagines Luther using the term “bro,” which is considerably more in line with Peter Quill’s voice than Luther’s own. This specific scene, which features the well-known dancing tune, is inspired by Star-love Lord’s with Footloose.

Along with the dance scene, the umbrella academy 3 features a song called ” the house of the rising sun”. We know this song was performed by the famous Jeremy Renner aka Hawkeye from the avengers.

These few cameo scenes were something that only a true avenger fan would have noticed.

Why does the contentious assault scene in Umbrella Academy damage the narrative of one character?

No one in season one’s opening episodes captured this better than Allison, sometimes known as #3 or The Rumor, depending on who you ask.

She was given the capacity to control others with the utterance “I heard a rumor,” but she struggled with this gift, eventually renouncing it completely to pursue a successful acting career and a relationship with her daughter even as her marriage broke down.

But as season three signs of progress, a character change occurs to this formerly confident lead that is almost beyond redemption. Nowhere is this change more apparent than in a certain scene that occurs halfway through episode five. She seeks to sexually abuse her de facto brother Luther using her position of authority and her spearheaded initiative.

Fans never really liked Luther and Allison’s connection, and by the time season two premiered, a potential will-they/won’t they situation that had existed in season one for the adopted siblings had been quickly resolved. It turns out that no matter how adorable a romantic dance scene between celebrities is, viewers will still think of them as siblings.

This argument is strengthened by the family theme that runs throughout the narrative. Even though they are not officially blood relatives, they have been up as much since birth, making any relationship strange if not outright unlawful.

We sincerely hope you liked reading this piece. Umbrella Academy season 3 Marvel cameo has been the subject of numerous discussions. You must watch the series if you haven’t already. Additionally, share your thoughts in the comment box.