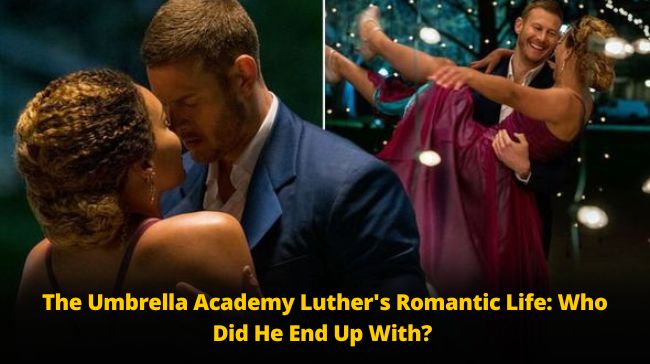 Season 3 of Netflix’s The Umbrella Academy is out now. It came up with quite a few surprises in store for viewers, including Umbrella Academy Luther being offered an unlikely second chance at love, but was it the right person for him?

In this article, we will know how Luther & Alison quit their relationship and who is his new love interest of Luther.

From the start of the Umbrella Academy Luther and Alison have been together. They have faced every torcher that Sir Reginald Hargreeves has put on them. But season 2 has been quite hard on them. Though they had deep feelings for each other, circumstances made them choose the opposite path.

After the death of Ben, Sir Hargreeves sent Luther to the moon and he lost contact with Alison.

When Luther returned, they were both still in love, but showing each other what they felt was not that easy.

In season 2, they separated at the time. Alison tried to move on and for that, she got married to Patrick and gave birth to a girl named Claire. Alison was never the same after this incident. When Luther finally found her, he was devastated, but when he saw how happy Alison was with her new family, he decided to give up on her.

The Umbrella Academy Luther and Sloane – Something more romantic?

Season 3 of the Umbrella academy brought a lot of changes & a lot of surprises. First was the introduction of Sparrow Academy.

When Sir Hargreeves met the Umbrella academy in 1960, he found them not worthy of his secret task, so this time he adopted another set of children for his mission.

When Umbrella Academy came back to the present time, they met the sparrow academy & Luther met Sloane. Though they were fighting against each other, they developed a feeling for each other at first sight. And the story moved forward to unite them eventually.

In the last episode, when the world was ending, they decided to get married. Though their marriage lasted only a few hours, after which Hargreeves killed the Umbrella Academy Luther, their love was epic. Alison tried to get him back, but he was immensely in love with Sloane.

In the present time, Alison has lost everything she had, her family and now her love Luther.

She tried to control the Umbrella Academy Luther with her power but seeing how much he cared about Sloane; she also gave up.

Luther never meant any bad for Alison, but his love for Sloane was true.

On the other hand, Sloane also had dealt with loneliness for her whole life, and Luther’s love was like a light for her.

Fans were devastated by how she felt when Luther died. This was the end of the Umbrella Academy Luther & Alison’s love story. And also the end of the series.