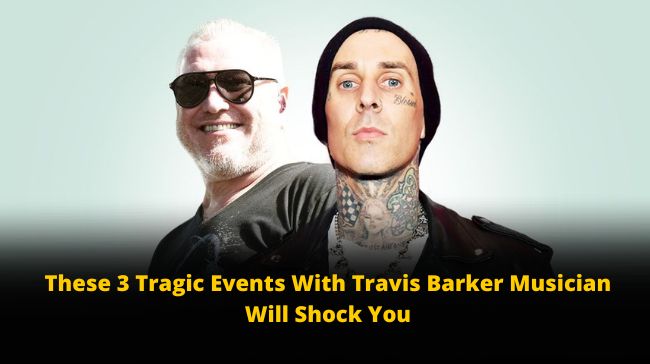 Look at the weather. How can we not go for a drive, listening to some good music? Music is love and so are the musicians. Are you a music fan too? Music can pep up and charge your mood anytime, anywhere.

We recently came across the tragic life story of the famous Travis Barker Musician, and to be honest, we were shocked!

So, here are the top 5 tragic events that happened in Travis Barker’s life.

Something about Travis Barker Musician

Let’s say, for more than two decades, he has been one of the most visible, active, and productive drummers in rock. Also known as Travis Landon Barker, he’s an American musician who serves as a drummer for the rock band Blink-182.

He has also performed as a frequent collaborator with hip-hop hearts and is also a member of the rap-rock group Transplants, who founded the rock bands +44 and Box Car Racer and then joined Antemasque and Goldfinger. Due to his fame,  Rolling Stone referred to him as “punk’s first superstar drummer” and one of the 100 greatest drummers of all time—OMG, isn’t it amazing?

He recently was unofficially married to Kourtney Kardashian on 3rd April 2022, in Las Vegas, after the 64th Annual Grammy Awards. The duo officially then married on 15th May 2022 in California.

And boom, on 29th June 2022, Travis Barker Musician was hospitalized after experiencing stomach pain and an inability to walk. OOPS, it was later reported that he was suffering from Pancreatitis—What really?

This is so sad. But this news is just so depressing. Here are a few tragic truths about his life that all the fans need to know.

Travis Barker’s mother died when he was 13

His mother, Gloria Barker, was also known as “Cookie.” He was very close to his mom. In fact, in an interview, he also shared that she was always there for him, no matter what. She was the one who kept him in discipline and helped him get intellectually sharp!

No wonder the religious musician loved her so much that he even got a back tattoo done for her, which he posted on Mother’s Day in 2014–This is love!

Travis Barker Musician, wasn’t treated fair due to his appearance

A scary plane crash left him with all the burns

He just had a bad feeling about this one. Barker boarded a private jet in 2008, September which skidded off the runway and burst into flames. The pilots were dead, but somehow a few managed to escape the wreckage.

Can you believe that 65% of the body was burnt with 27+ surgeries in this phase?

He had a lot of intense body pain during that phase. It was also challenging for him emotionally. Post the plane crash; he had PTSD, too. His family helped him, and also, the therapies and his mental health got better!

Also, he was the one struggling with drug addiction and so on. Travis Barker Musician, we wish you a speedy recovery and stay strong!