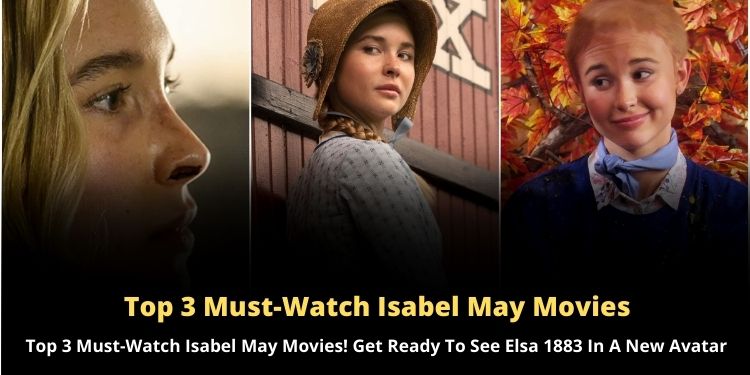 Recently, Paramount+’s adventure-thriller series, 1883 has grabbed the limelight. While the series has driven in a huge viewer base, Isabel May as Elsa Dutton, the main protagonist has experienced a high tide of popularity.

So, if the 1883 series have made you fall in love with Isabel May aka Elsa Dutton, here are the top 3 Isabel May movies that are must-watch for you –

Isabel May has left a mark on the hearts of the audience with her incredible role in Yellowstone 1883. Though she ultimately dies in the new series, you can always watch her incredible performance in the following movies –

You may be surprised to know that such a brilliant performer like May, only has on-screen credits in four ventures, including shows and movies. She had her first exposure to the entertainment world with the Netflix series, Alex & Katie. It is originally a High School drama show that revolves around two characters – Alexa and Katie.

Let’s Scare Julie is one of the latest ventures of Isabel which was released back in 2019. The movie features a group of teen who tries to prank their new neighbor, however, their plans invite a new disaster.

Though the movie received mixed reviews, if you are an Isabel May fan, it’s a much-watch as you will see her in a new avatar.

When it comes to the best Isabel May movies, how can we forget to add her blockbuster work, Run Hide Fight? It’s a 2020 American action-drama thriller that impressed tons of viewers. Featuring popular stars like Thomas Jane, Isabel May, Eli Brown, and more, the movie dropped back in September 2020.

Run Hide Fight received 7/10 stars, which makes it a much-watch for the Isabel May fans.

Here are the top three Isabel May movies you much-watch. So, which one is your pick for this weekend?