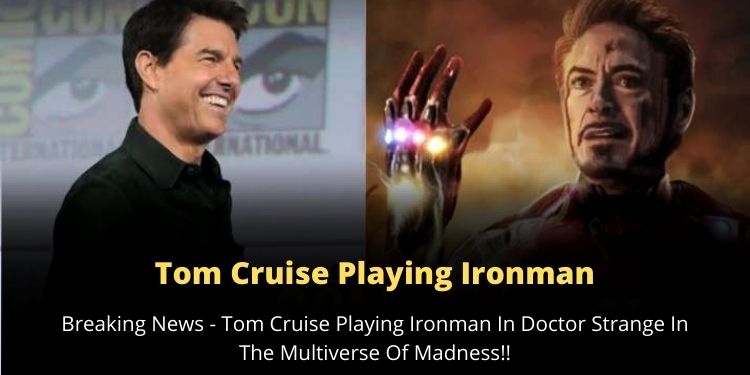 Will Doctor Strange 2 come with the major shock of Tom Cruise playing Ironman? Here is all we know so far.

With the audience counting days for the release of Doctor Strange in the Multiverse of Madness, every other day a shocking leak or rumor is dropping to stun them. Recently, an image leaked from the set of Doctor Strange 2 featuring the fan-favorite, Tom Cruise playing Ironman.

The leaked image has fueled great hype among the fanbase. While some fans are extremely happy witnessing a new variant of Iron-Man, some have showered their negative comments, quoting that no one other than Robert Downey Jr. can justify the role of Iron-Man.

So, are the rumors true? Is Tom Cruise playing Ironman, a cameo role in Doctor Strange: Multiverse of Madness? Or is this just a way to create hype among the fans? Here is everything you need to know.

Hands down! Doctor Strange in the Multiverse of Madness will introduce a bunch of the biggest cameos in the Marvel Universe to date. With tons of characters like Magneto, Wolverine, Professor X, Spider-Man, and more joining the movie, it will be a blast for the fans.

However, when the official updates about Iron-Man’s cameo role were released, the fans were expecting to see Robert Downey Jr. back on their screens as Tony Stark AKA Iron-Man.

Robert Downey Jr. has been playing the role of Tony Stark aka Iron-Man, right from the origin of the character in MCU. He continued to deliver insane performances in all MCU movies as Iron-Man right from 2008 to 2019.

However, in 2019, Robert made an exit from the scene as MCU removed the character of Iron-Man as of now.

Since then the fans have been craving to see Iron-man back on the screens and finally, it’s happening, but with a little twist.

As per the latest rumors, we will be seeing Tom Cruise playing Ironman in the new Marvel movie. Recently, a hazy image leaked from the set of Doctor Strange in the Multiverse of Madness and it went viral on social media.

The image features Tom Cruise as Ironman. The image was leaked by a Twitter handle that posts regular content of pop culture leaks. The leaked image came with the caption, “(Rumor) Possibly the first image of Tom Cruise playing Ironman on the set #DoctorStrange2.”

However, the main question is whether the picture is from the set of Doctor Strange 2 or not. Moreover, the picture is hazy, therefore it’s difficult to say whether it’s Tom Cruise or someone looking similar to him. There is no official confirmation of the facts.

But with Spiderman: No Way Home exploring the multiversal angle, introducing Spiderman from a different universe ignites a strong chance that we may see Tom Cruise as Ironman’s variant from another universe.

In a previous interview, Tom Cruise has also shared that he has a keen interest in producing and starring in an Ironman movie. So, this may be the next big thing happening in his career.

(Rumor) Possibly the first image of Tom Cruise on set #DoctorStrange2 in (Motion Capture) for his Iron Man pic.twitter.com/nlvjj7sBAm

Though there is no verified news on Doctor Strange 2 featuring Tom Cruise as Ironman, there are tons of rumors floating around. Moreover, Doctor Strange 2 will most likely deal with the consequences of opening the gates of the multiverse during Spiderman: No Way Home.

Therefore, we can expect to see a lot of variants of different MCU characters in the upcoming movie. As per the reports, tons of amazing actors have been roped in for playing cameo roles in Doctor Strange 2. However, Tom Cruise playing Ironman news is a sudden shock for many fans.

Speaking about the role of Tom Cruise as Ironman, as per the rumors, Tom Cruise will be the Ironman of an unknown universe. However, in this world, he is the King. He accomplished the dreams Ironman had in Avengers: Age of Ultron and now he believes himself as a God.

Moreover, in this universe, we will see President America, something that he has already seen in the What If…? episodes.

So, summing up all, Tom Cruise’s introduction as Iron will add the much-needed spice to the plot of Doctor Strange In The Multiverse Of Madness. So, fingers crossed, and let’s hope these rumors turn out to be true.

So, what is your call on Tom Cruise playing Ironman? Let us know in the comment section.

Follow us for more Doctor Strange in the Multiverse of Madness spoilers and leaks. Bookmark our page to get all updates first.

1 thought on “Breaking News – Tom Cruise Playing Ironman In Doctor Strange In The Multiverse Of Madness!!”