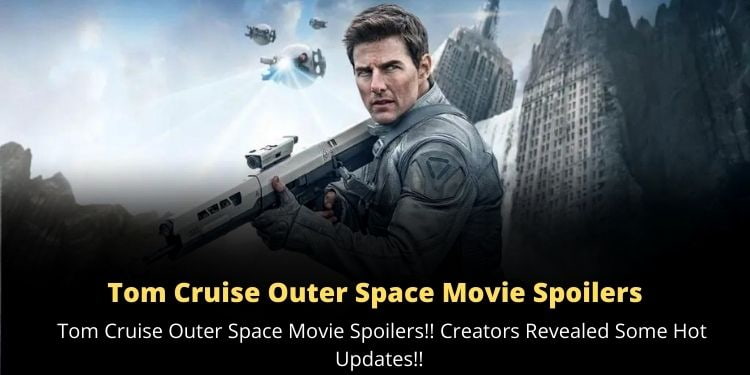 So when is Tom Cruise Outer Space movie dropping on our screens? Here are some thrilling news coming out from the buckets of the creators.

Whenever we hear the name Tom Cruise, the first thing that hits our minds is nail-biting action. Whether it’s performing some insane shots in Mission Impossible series or giving the audience mini heart attacks in Top Gun: Maverick, Tom Cruise has never disappointed his fans.

So, now, the action star is gearing up to deliver something out-of-the-box to the audience. Back in 2020, Tom stunned his fans by announcing his collaboration with Elon Musk’s SpaceX, Christopher McQuarrie, and Doug Liman to jump into a new journey to space.

It was announced that the fan-favorite star will be setting off to outer space to collect some incredible shots and deliver cinematic entertainment to his fans.

However, since then the fans have not got any updates on the Tom Cruise Outer Space movie. They were even craving to know the official title of the movie, yet the creators kept everything under the wraps.

If you are a Tom Cruise fan hustling around the Internet to get fresh updates on Tom Cruise Outer Space Movie, it seems that you ended up at the right stop as Sassyshows has finally got its hands on a bunch of the latest news. So, here is everything we know so far.

The action hero Tom Cruise is gearing up to craft something he has never done before. As per the sources, Tom Cruise is joining hands with Christopher McQuarrie and Doug Liman to shoot some scenes on the International Space Station for his upcoming movie.

Back in 2020, just after a few months of the entry of the covid-19 pandemic, officials revealed that Tom Cruise Outer Space movie will be featuring some shots of the International Space Station and the actor will also shoot some scenes in space.

While this was a new project for the team and it was supposed to be revealed in October 2021, the Russian movie team beat Tom Cruise’s project by spending twelve days in space for their upcoming film titled, The Challenge.

As per the updates, Tom Cruise Outer Space movie has been delayed by the covid-19 pandemic and certain internal matters. So, the fans will have to wait a bit more to see the movie on their screens.

As per the sources, Tom Cruise’s upcoming project will reteam with Doug Liman, the director of Edge of Tomorrow, and Christopher McQuarrie, the popular director behind Mission Impossible: 7.

Sassyshows’ sources have revealed that the creators are working on the script of the movie as of now. However, the movie will feature Tom Cruise as an everyman who would realize that he is the one who is held with the responsibility to safeguard the world from an unexpected threat.

Though there are tons of rumors floating around the Internet revealing that the Tom Cruise Outer Space movie will be featuring all scenes from space, originally the movie will include some clips from outer space. While it will be mostly shot on Earth.

As of now, there is no confirmed release date for Tom Cruise’s outer space project. However, if you are here, you already know that the pandemic has interrupted the schedules of the creators.

Moreover, Tom Cruise’s busy schedule has also prevented this movie from becoming his top priority. So it seems the fans will have to wait for a few more months to get the official updates of the Tom Cruise Outer Space movie.

So, what do you think, will Tom Cruise come up with something really awesome in his new outer space project? Or the creator will add a minimum amount of space clips in the movie? Tell us in the comment box.

Follow us to get all the updates on the latest movies and shows. Also, bookmark our page as we will keep on adding the latest news of Tom Cruise Outer Space movie in the future.