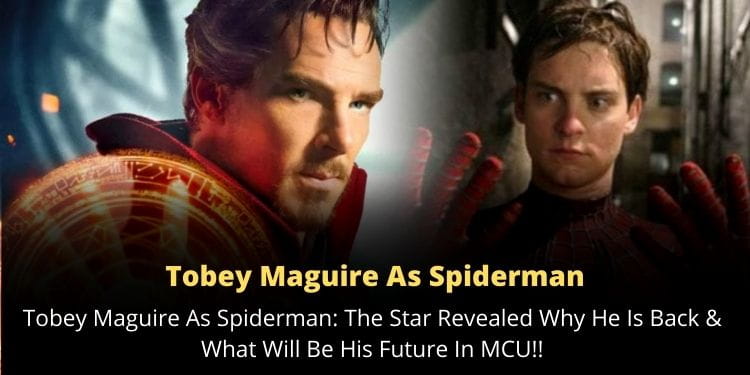 Finally, after a lot of waits, Tobey Maguire has opened up about his return in Spiderman: Now Way Home. So, will we be able to see Tobey Maguire as Spiderman again? Here are the hot updates.

Return of Tobey Maguire As Spiderman!!

So, finally, in the first-ever interview after Spiderman: No Way Home, Tobey Maguire revealed why he is back as the Spidy guy. He opened up on what compelled him to reprise his role.

Spiderman: No Way Home has turned out to be one of the blockbuster movies ever coming from the bucket of Marvel and Sony. Thanks to the extra spice of cameo roles the movie delivered to the audience.

So, it’s been over a month since Spiderman: No Way Home hit the screens worldwide and all the Tobey Maguire fans were craving to get updates on the return of Tobey Maguire as Spiderman in MCU. They were storming the social media platforms and Marvel forums with questions regarding the future of Tobey Maguire in MCU.

However, the silence of the actors was compelling the fans to weave their own theories. But finally, Tobey Maguire in his latest interview opened up on why he ultimately stepped into the project and returned as Spiderman under Marvel Studio.

In the interview, Tobey Maguire said, “Yeah, ho, I know. Maybe you could just give me a little more information. But, I don’t know. I gotta say, I was intrigued immediately. In that conversation, the intention, the kind of love and celebration of these movies, and what it meant, I think to Amy and Kevin was apparent. To me, when artists or people who are, ummmm, steering the creative process have a kind of authentic, genuine intent of the celebration and love, it was just so apparent in both of them that I just wanted to join that.”

Tobey further added, “I am a huge fan of Tom Holland and those movies and also Andrew. So it was also going, ‘Well, what what are we going to?’ I did appreciate what was shared. But, it was really about getting together with these people and revisiting what was part of the history, and getting a chance to like come together. “

He continued, “There are personal things too, which are kind of resolutions or a way to revisit and… I am not quite sure how to put them together. It’s just to get back into that I don’t want to say like close the chapter… But revisit and have certain resolutions and just join in this loving creative spirit.”

If you are a die-hard Spiderman fan, we know you love watching Tobey Maguire as Spiderman. He portrayed the role to its best under the amazing writing of Sam Raimi in Spiderman 1, 2 & 3. While the fans were heartbroken at the exit of Tobey, the social media started loading up speculations on Tobey’s comeback, and finally, it’s here.

We again saw Tobey Maguire as Spiderman along with Tom and Andrew. Well, believe me, if you are a fan, it would surely be a nostalgic moment for you, witnessing your childhood superhero back on screen. Moreover, we hope that Tobey gets at least one more solo movie, Spiderman 4. Fingers crossed and let’s hope for the best.

Make sure to share your views on will Tobey return as Spiderman again in the future projects of MCU?

Follow us for regular updates on the latest movies and series. Also, bookmark our page to keep yourself updated with the latest entertainment news.

2 thoughts on “Tobey Maguire As Spiderman: The Star Revealed Why He Is Back & What Will Be His Future In MCU!!”