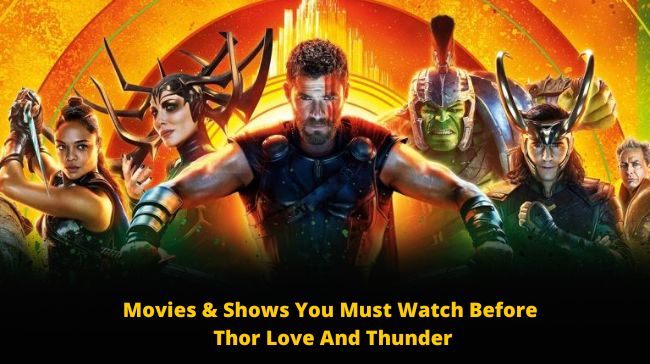 Although this is Thor‘s fourth film, the former God of Thunder has traveled a long and convoluted path to reach this point.

Thor’s whole character journey has been leading up to this crossroads in his life, from becoming an Avenger to losing his brother Loki (Tom Hiddleston) and rediscovering his self-confidence after five years of despair.

If you need a review on Thor’s backstory before seeing his newest film, here’s a list of every Marvel film you should see before seeing Thor: Love and Thunder.

Watch These Movies & Shows Before Thor Love And Thunder

Let’s go back to the beginning before tuning into Thor Love And Thunder. The first Thor film marked the Marvel Cinematic Universe’s first journey into the paranormal and arcane realms.

Thor begins as a petulant and immature divine who is deprived of his powers until he learns humility.

Following his brother Loki’s attempt to take over Asgard and the human realm of Midgar, he knows how to wield his godhood correctly and becomes a hero after meeting Jane Foster on Earth.

Thor’s return to Earth is shown in the first Avengers film. Thor seeks to catch his brother Loki and bring him to Asgard after Loki causes havoc in the human realm.

Thor establishes an uneasy partnership with Loki to save the Nine Realms from the danger of the Dark Elves in this underappreciated Thor sequel.

Jane, meantime, strives to control the Aether, a formless mass of unlimited energy that the Dark Elves are after.

Thor returns to the fight when Earth’s most powerful warriors are needed once more. Thor discovers the Infinity Stones are being used for an unknown reason while confronting the robotic monster Ultron (James Spader).

After assisting in rescuing the planet from Ultron’s army, he swears to track down the Stones to prevent a more catastrophic occurrence.

Thor and Loki fight against the Goddess of Death Hela (Cate Blanchett), who attempts to bring about Asgard’s predicted destruction in this trippy and psychedelic Thor film.

Thor encounters Valkyrie and reunites with Bruce Banner/Hulk after losing his hammer and being trapped on the trash planet of Sakaar (Mark Ruffalo). They save the Asgardian people from impending doom by sacrificing the city itself.

Thor pledges revenge when the Mad Titan Thanos (Josh Brolin) kills Loki on his mission to collect the Infinity Stones and tries to disrupt Thanos’ ambitions.

He forges a new ax, Stormbreaker, with which he attempts to slay Thanos. Unfortunately, he cannot confront Thanos before wiping off half of the universe’s inhabitants.

Thor gets sad five years after the fight with Thanos, having resigned himself to a life of drinking and gaming.

After being recruited in a time travel heist to recover the Stones and repair the universe, he regains his sense of purpose and obtains the Reality Stone. Later, he joins Thanos’ army in the climactic fight.

So, these were our top picks for the movies you must watch before tuning into Thor Love and Thunder.

Also Read – Why Thor looks so different in Thor Love and Thunder?