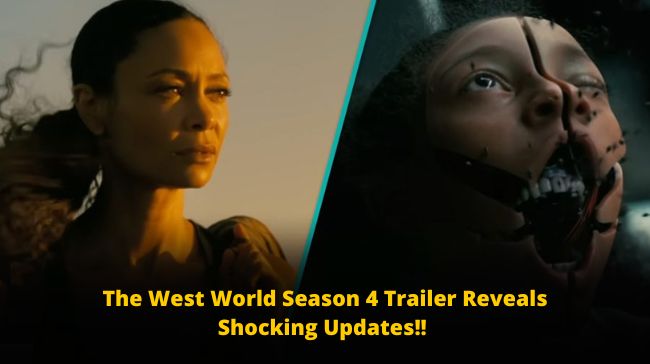 With the release of the Westworld season 4 trailer, the series is finally back! Fans of the show have been waiting for nearly three years without new episodes.

The third season premiered way back in March 2020 – which means it was about two and a half years ago when we last saw this sci-fi series’ latest plot developments unfold on our screens.

But now that the Westworld Season 4 trailer is out, is it worth the long wait? Here is all you need to know.

The West World Season 4 Trailer Is An Explosion!!

HBO Max’s ‘Westworld’ fourth season will finally be released soon. The trailer of season four is very mysterious. It does show many details to the fans, but at the same time, it hides several things. The West World Season 4 trailer shows many familiar faces. As well as it depicts some crazy images.

The fourth season of Westworld, dubbed “A bleak expedition about the destiny of sentient life on Earth,” will debut on June 26 with eight episodes. “We need to reinvent ourselves,” HBO Max said in a trailer tweet. HBO Max will broadcast Season 4 of #Westworld on June 26.”

After seeing the Westworld season 4 trailer, here is what we can expect!!

As you might remember from last time, Dolores (Evan Rachel Wood) gave up her life at the end of season 2 to save both humans and hosts from Serac (Vincent Cassel).

However, death is never final here; instead – there are even bigger machinations in store when it comes to Evan Rachel Wood’s newest appearance on Westworld!

However, it correctly sets the tone and includes a banger of a song to get viewers excited for the next installment, which remains one of the most groundbreaking series presently on air.

Westworld Season 4 trailer reveals that Evan Rachel Wood is not finished with this show yet. Though Dolores might be gone, she will now play the role of Christina in the newest installment.

Her voice-over monologue shows us that she has found some despair about life which could lead to her making a significant impact on events from here on out.

The remaining trailer consists of other characters talking, and waxing philosophical about the roles of man and machine on the planet.

They are also seen talking about how destruction seems to be the game’s name for any entity. The whole trailer is set to the tune of “The Day the World Went Away” by Nine Inch Nails. As always, they have selected the right tune for the trailer. Some previous songs used in the show were ‘No Surprises’ by Radiohead and ‘Black Hole Sun’ by Soundgarden.

So this was all about the new West world season 4 trailer. Fans are too excited about this series, which we expect to release on June 26 on HBO & HBO Max.

Until then, we’ll keep you updated on the following announcements from this series. If you have more information about this series that we missed, please share it with us in the comment box.

We eagerly wait for your comments & are always curious about what our readers expect from us.