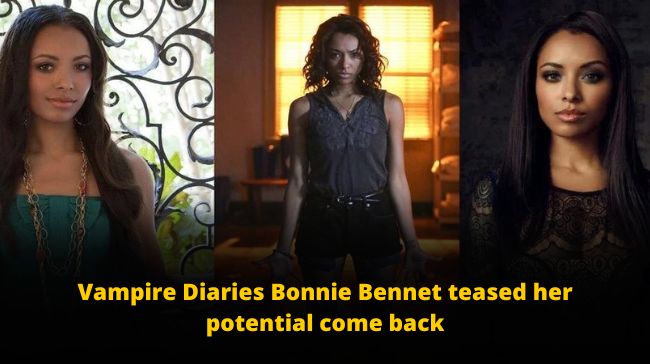 The Vampire Diaries Bonnie “Kat Graham” is one of the most popular stars of Hollywood. She is an actor, singer, and dancer from the United States who performs under the stage name Toro Gato.

Bonnie Bennett was one of the most iconic characters in The Vampire Diaries, and her story ended with a pretty big cliffhanger.

So, in this article, we’ll explore Kat graham’s career and life post-The Vampire diaries. And discuss if the Vampire Diaries Bonnie will return to the franchise or not!!

She is a native of Switzerland who was born in America. She began her career as a dancer before branching into acting, singing, and doing several advertisements. She appeared in a few music videos during her early career as a backup dancer.

Kat performed essential parts in movies and made her television debut at thirteen. She debuted in the 1961 film ‘The Parent Trap’ and subsequently appeared in blockbusters such as ’17 Again.’

Kat is a dancer, singer, and actress who combines all these talents into one! In addition, she’s done some modeling. Even though the Tupac biopic ‘All Eyez On Me’ earned poor reviews from critics, she is a huge admirer of the late singer Tupac Shakur and was thrilled to be cast as Jada Pinkett Smith.

Graham teases her return as the Vampire Diaries Bonnie!!

Graham addresses if she would return to her Vampire Diaries role in an interview with ET. Fans may be excited to see Bonnie and the other residents of Mystic Falls again, but Graham is quite content to leave the Vampire Diaries behind.

Is there any chance of Kat Graham coming back as The Vampire Diaries’ Bonnie?

The numerous mention of the Vampire Diaries’ Bonnie’s name in the Originals & the Legacies gave us hope to see her again on the show.

But it seems she was a mentor to Josie and Lizzie, staying close to Caroline and Alaric in Mystic Falls but not in the front.

They announced the cancellation of the show Legacies on 12th May this year.

Even though reboots and revivals are increasingly popular, not every performer is willing to reprise their roles.

Actors from Daniel Radcliffe and Keanu Reeves to Dylan and Cole Sprouse have said no to sequels, reboots, or spin-offs of their most famous parts.

The reasons range from dissatisfaction with the business to wanting to close a chapter in their lives, like in Graham’s case.

Eight years is an incredibly long period to be a part of a TV show, especially one that is long and demanding enough to put other projects and ambitions on hold.