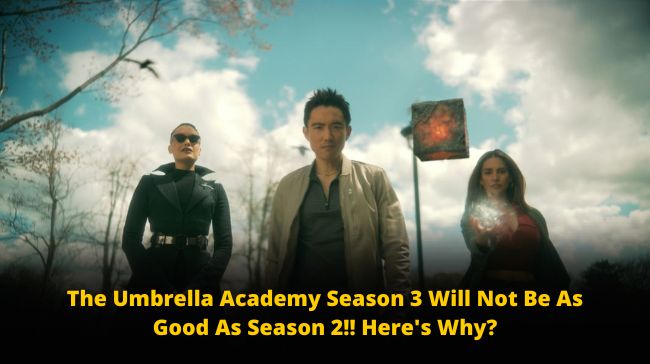 The Umbrella Academy season 3 is less than a week from landing on Netflix. The misadventures of the Hargreeves family, a gang of odd superheroes who must save the world from some kind of explosive disaster time and again, is based on Gerard Way’s comic book, which he created and artist Gabriel Bá.

While the fans are waiting for the Umbrella Academy Season 3, they are curious if the new season will meet their expectations or not.

Well, though season 3 has ignited a lot of hype, we believe it will not be as good as season 2. Read more to know why we said that.

Everything We Know About The Umbrella Academy Season 3!!

This season blends the moodiness of Season 1 with the brisk pacing, bizarre nature, and enormous heart of Season 2.

So you better dust off your dancing shoes and prepare to shimmy along to whatever iconic dance number is coming our way very shortly.

Still, suppose you hang in there through a few slower initial episodes. In that case, you’ll see a touching portrait of a complicated and flawed family, bolstered by outstanding performances and a good serving of Umbrella Academy-style entertainment. A dramatic conclusion occurred on November 22, 1963 (the day of JFK’s assassination).

As shown by Number Five, the siblings avoided the Doomsday catastrophe. Vanya was once again “the bomb,” but this time, she was disarmed. Vanya was calmed by Ghost Ben when he merged with her. Yet, like his spirit, he was ultimately sacrificed.

Everything You Need To Remember To Watch The Umbrella Academy Season 3!!

Previous seasons of The Umbrella Academy were all smash hits. Its quirky mix of eccentric characters, cool powers, and sci-fi musings make it one of the most original shows you can stream.

This show follows The Umbrella Academy where a group of seven children who were born on the same day with extraordinary powers. Adopted by Sir Reginald Hargreeves, the children are fashioned into superheroes who will one day save the world but we soon find that the grown-up Hargreeves kids are more of a dysfunctional family these days.

The Umbrella Academy Season 3 starts slowly, but it eventually finds its stride and carries through with what it does best, developing the characters of Klaus and his siblings.

There isn’t a single actor who delivers an underwhelming performance.

Tom Hopper stands out as Luther; Emmy Raver-Lampman shines most brightly when she plays Allison, even though she had to portray two very different characters simultaneously.

But there are some definite changes from past seasons here too, less humor and action sequences so far (but still enough for me). What this installment lacks in eccentricity, it makes up for in heartwarming scenes that cut deep no matter how messed up your family might be (especially if they’re messing around with time).

Read More – Why Is The Umbrella Academy Ben In The Sparrow Academy? Here Is The Shocking Truth