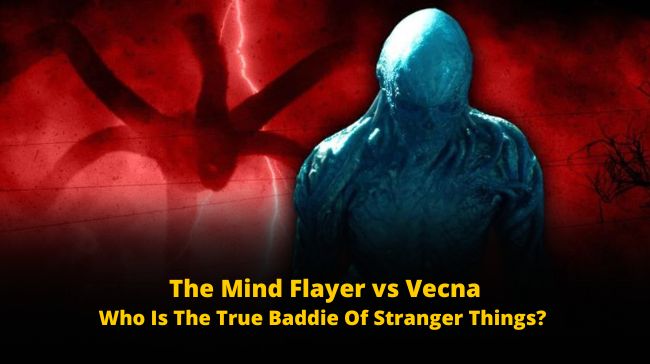 The Mind Flayer vs Vecna, who is the more deadly villain in Stranger Things? Read on to know more.

So, all Stranger Things fans, we all know that the new monster, Vecna, is in the town, but this doesn’t mean we can forget the old one.

The Mind Flayer has been the main villain from the very first season. Although he was seemingly defeated in Season 3, how can we forget this powerful scary creature of the Upside Down?

The internet is raging all about Stranger Things Season 4, Volume 1 and the big bad Vecna has created a buzz on social media. The new villain has super amazing bad powers. Even being named after the incredibly powerful Dungeons and Dragons Villain, his story was unknown in the previous seasons. But ah, there’s no doubt why Vecna is so dangerous to the Hawkins and the world.

So, let’s see The Mind Flayer vs Vecna – who is the more deadly villain.

Who’s The Big Bad Monster: The Mind Flayer Vs Vecna

The Mind Flayer v/s Vecna, let’s see who is the more impactful villain in Stranger Things.

The new Stranger Things baddie, Vecna, is not from the massive monster gang or like just another soldier. In fact, he’s the true leader!

On the other hand, Mind Flayer is masterly trained in his ability to take advantage of his many resources and not open gates. However, Vecna, because of his connection to the Right Side Up, also with his physic abilities, thus makes an ultimate and terrific asset for Mind Flayer.

It is possibly said the bad villain Mind Flayer approached Vecna because of his super scary powers and his capacity to open small gates throughout Hawkins so that they could get through again.

Remember, the Mind Flayer is the reason why one flew right into the Upside Down after Eleven opened a gate. He was just awestruck by the striking lightning and thus he became the horrifying humanoid that he’s today!

Let’s suppose Vecna is working against Mind Flayer — which still no one knows. If Vecna is trying to overpower the Mind Flayer and attempting to become The Upside Down’s new ruler, Vecna’s curse in Stranger Things would definitely take years to develop!

But yes, it makes equal sense for Vecna and Mind Flayer to be amalgamated. For him to be not connected to Vecna would just be just unrealistic, but details about their connection are truly speculative.

Well, Stranger Things has more answers coming upon Volume 2’s release. But for us, Vecna and Mind Flayer both are big monsters!

And why don’t you yourself see who’s the scariest — The Mind Flayer vs Vecna!!

Read More – Who is Vecna? Meet The Badman Of Stranger Things Season 4