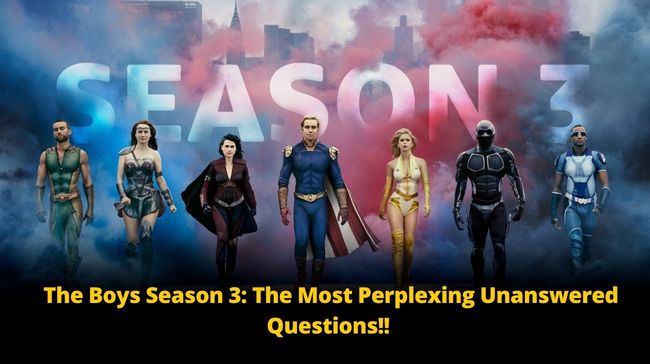 As far as streaming shows go, “The Boys” from Amazon is one of the most outlandish. The Boys Season 3 has marked its climax leaving a bunch of questions. So, here are all the questions that were left unaddressed by the Boys season 3…

This is a violent, murky, confusing environment in which “The Boys” live. Things get even crazier in The Boys Season 3, which may be the show’s most intense run.

Significant decisions are made, and blood is shed as shocking revelations rock the planet. Despite all the revelations, there are still some unanswered questions at the end of this season. Season 3 of “The Boys” leaves us with many unsolved questions.

Can you see Victoria Neuman in the Oval Office?

One of the show’s most intriguing characters is Victoria Neuman (Claudia Doumit). It’s easy to label her as evil, but it doesn’t do her justice; she’s far more nuanced than that.

As long as Stan Edgar and Vought International can keep her out of the limelight, she’s happy to work with Starlight. Oh, and she possesses head-exploding skills, but she prefers to keep that information under wraps. ‘ With Neuman and Robert Singer both running for vice president, Edgar is hoping to persuade Robert Singer that allowing superheroes to join the military is a good idea. As far as I know, he’s as interested.

On the other hand, Singer is wary about implementing such a measure. If Neuman and Singer are elected, will Neuman use her powers to kill Singer and capture the presidency for herself?

Since she’s already collaborating with the evil guys, why not make the most of the situation and ascend to the position of power? It is only speculation that she will have the chance to do so in Season 3.

Will Hughie and Butcher be able to use their abilities in the future?

The Compound V in the Boys Season 3 gives Billy Butcher and Hughie superpowers. Super strength and thermal vision are bestowed upon Butcher, while Hughie can teleport.

This batch of Compound V’s effects wear off after 24 hours, but there’s a workaround. This is unlike the Compound V we’ve seen thus far, which is a constant de-powering chest beam if Soldier Boy does not blast you.

Who knows — maybe Billy Butcher turns out to be evil?

Billy Butcher, rather than Homelander, poses the most significant threat near the end of the “The Boys” comic book.

Butcher feels hollow after exacting retribution on Homelander and the sure responsible for his wife’s death. It is decided that he will kill anyone with Compound V in their system rather than continue on.

How likely is it that Nina, the Little, will make another appearance?

Russian mobster Frenchie used to work for Little Nina (Katia Winter). It is only when the Boys learn that Soldier Boy was kidnapped and experimented on while battling the Soviets in Nicaragua that they force Frenchie to get in touch with Nina. Despite Frenchie’s pleadings, there is no hope for her.

Because the program has previously undergone numerous adaptations, it’s impossible to predict how closely the series’ conclusion will resemble the comics. Some scenes in the Boys Season 3 do, however, hint at the possibility.

Read More:- Thor Love And Thunder Leaks: Every Character Who Died In The End!!