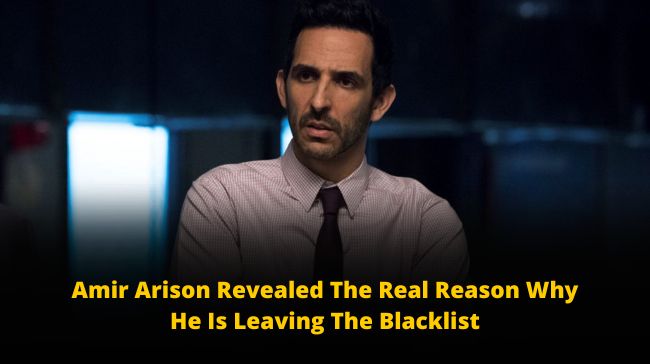 After nine seasons on The Blacklist, Amir Arison is leaving the show. For season 10, the actor will not reprise his series role as Aram Mojtabai.

Here is everything you need to know about the departure of The Blacklist Amir Arison and how his character, Aram Mojtabai, is saying goodbye to us all.

The Blacklist Amir Arison Is Leaving The Show!!

Aram Mojtabai opted to leave in Season 9- the finale of The Blacklist.

Aram Mojtabai, played by Amir Arison, has struggled with mental health issues throughout Season 9 of The Blacklist.

He has been feeling enormous guilt not only for Liz’s death but also for not being able to stop his prior girlfriend Samar from acquiring vascular dementia, according to the episode “The Bear Mask.”

Aram acknowledges that he has struggled with anxiety, OCD, and depression, throughout his life. When nothing else seems to work, he turns to LSD therapy.

He joined the rest of the task force at Liz Keen’s grave at the end of Season 9. He informs his pals that he has decided to leave the task force for an undetermined period of time.

“My plan is to have no plan,” Aram declares. “I discovered a fantastic spot in Brooklyn, and I intend to ride my bike up to New York, see the sights, eat a lot of pizza, and maybe see a Broadway musical,” Cooper responds that he thinks Liz will enjoy the concept.

According to the Deadline, Amir Arison is quitting The Blacklist to prepare for his Broadway debut.

This summer, Arison will play Amir in the stage adaptation of The Kite Runner. The show is based on Khaled Hosseini’s novel of the same name.

The Blacklist Amir Arison wrote on Instagram: “I have always wanted to perform a Broadway show, but that desire developed into television with the hope of collaborating on a fantastic series.” “The Kite Runner is one of the most amazing books I have ever read, and its Broadway version is both breathtaking and urgent.” “I could not pass up the chance to realize yet another childhood ambition.”

Will Amir Arison return to ‘The Blacklist’ in the future?

“He’s a fantastic actor and an even better person,” the EP continued. We wish him the best of luck and hope that he will be able to reprise the role for a few special episodes next year.”

Arison, for one, appears to be receptive to the possibility of returning.

“Showrunner John Eisendrath, the producers, writers, studio, and network have all been tremendously supportive of my decision,” the actor posted on Instagram.

“‘Aram’ remains ‘alive’ with the chance for a possible comeback at some point.”

“Story-wise it feels so organic with the events of this past season, and I couldn’t have asked for a better outcome.”