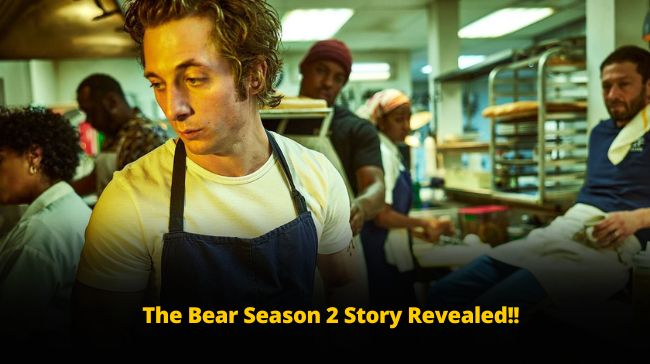 The story of the Bear revolves around the fictional James Beard Award Winning chef, Carmen Berzatto, who returns to his hometown of Chicago to take over his family sandwich shop after his brother committed suicide.

It was very unexpected for Carmen as he never imagined that his brother would take such a heart-aching step.

The Bear is also led by Calo, whose credits consist of Bojack Horseman, The Baby-Sitter’s Club, and Hacks. The co-showrunner and director Joanna Calo has some exciting ideas for the upcoming The Bear season 2 story.

Glimpse of The Bear Season 2 story The rumors are going around that the Shameless star Jeremy Allen White has returned to Chicago to take over the Bear cast of Carmy.

To accompany him alongside, the stars like Ebon Moss-Bachrach, Ayo Edebiri, Lionel Boyce, Liza Colón-Zayas, and Abby Elliott will also be there.

The show also features some Tier 1 stars as a guest like Molly Ringwald, Joel McHale, and Jon Bernthal as Carmy’s late brother, Mikey.

From the beginning, The Bear has received a tremendous response and 100% ratings on Rotten Tomatoes. The reaction among the audience spiked as The Bear renewed for Season 2.

Response of the co-showrunner on The Bear Season 2 story!!

Recently in THR’S TV’s TOP 5 podcast, Calo appeared and was asked how much the writers have covered the story after the sizzling end of season 1 finale.

Calo replied there are a lot of things that are still yet to be disclosed. The progress is not so much because of the differences raised among writers.

Still, he is optimistic as he believes that something unique will happen in the end. Also, he addresses that there are many things from the past that are yet to be shown.

The season 1 finale ended where Carmy received a farewell gift left by his brother Mikey, which was the cash hidden in the cans of tomatoes.

This cash motivates Carmy to close The Original Beef for the time being to open its new restaurant, The Bear. The Creator of the show, Christopher Storer, has already confirmed that the cash discovered by the Army will be used as start-up money for its restaurant, even though their debts to Jimmy (Oliver Platt) are yet to be settled.

Further, Calo also clarified that Season 2 would continue to explore the complicated relationship between the two brothers.

The crowd is already anxious to know what will happen ahead. Discussions all over social media have started as the new story is out!!