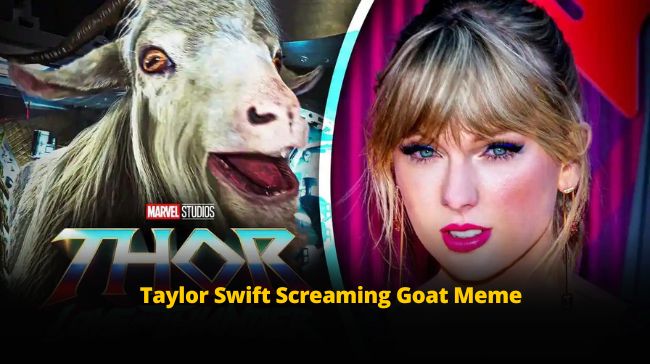 What’s happening these days on social media? We don’t understand. At times, gossip and mysteries are revealing, whereas, on the other hand, it’s the Taylor Swift screaming goat meme in Thor: Love and Thunder, which is grabbing everyone’s attention for obvious reasons!

The gorgeous Taylor Alison Swift is an American singer-songwriter. Her discography spans multiple genres, and her personal life sometimes inspires her narrative songwriting.

Did you know she was born in West Reading, Pennsylvania? Taylor moved to Tennessee at the age of 14 to pursue a career in music.

She also signed a songwriting contract with the best Sony/ATV Music Publishing in 2004; the rest is all history! Her fans love her so much that the fan base doesn’t leave a single update unread on her on the internet, right?

Have you seen Taylor Swift’s screaming goat meme? Let’s see what Taika Waititi has to say?

OMG. We are so in love with this Taylor Swift’s version of “Thor: Love and Thunder”.

Recently, in an interview, the director revealed the secret to this. Do you know why the unexpected nod to Taylor Swift in the latest MCU installment?

We remember that scene of stealing, screaming goats acting as sidekicks to Chris Hemsworth, Natalie Portman, and Tessa Thompson. Little did we know then that it was related to a unique connection with Taylor Swift- Were you aware of it, guys?

Waititi also said that the goats would always be there because they’re already in the comics, but she didn’t know how they would sound. It was like; they were never meant to be screaming.

Then, someone in the post-production found this meme off a gorgeous Taylor Swift song with screaming goats. Well, she says, she wasn’t even aware that it existed. So, when she heard the screaming goats, she just felt it was awesome: Isn’t it so strange?

Let’s say the Taylor Swift screaming goat meme then was just a coincidence, as it became famous after that.

The director even mentioned a lot of people think it’s her. But she’s not. She also says that one of the most memorable parts of the new film Thor: Love and Thunder-The constantly screaming goats, who led the god of thunder’s flying “chariot” as though inspired by an old mega meme featuring the pop star’s “I Knew You Were Trouble”.

The vendors were making the CG goats; they added this song, and Boom, the fan base made one with the goat sounds!

Aah? But don’t you feel that the screams were so freakingly incredible! Well, we understand the reason for Taylor Swift’s Screaming goat meme. And we agree with Director Taika Waititi.

Do you? Comment in the section below, as we can’t wait to read what our lovely viewers think!

Read More – Thor Love And Thunder Leaks: Every Character Who Died In The End!!